How Do You Solve A Problem Like...Arsenal's Midfield?

Is it a problem? I would argue "yes". And in truth it isn't just the midfield, it's the whole bloody Arsenal team! The problem in hand is one I'm guessing most - if not all - of us are struggling with; WHICH three players to pick from a high points scoring team.

I will concentrate on the midfield specifically, but let's quickly look at the other positions that are no doubt influencing your decision making:

With Arsenals normally leaky defence tightening up in recent weeks (4 out of 5 clean sheets with only the 1-0 loss to Man Utd to break the run) it is tempting to include at least one of the Arsenal back line in your team. They do have two home games in a row coming up, (Hull & Everton) but then go to Man City in GW16 and face Chelsea at home in GW17.

Giroud is still hanging around the top of the leaderboard for strikers, ahead of Suarez and just below Aguero and Rooney.

But why "waste" a place in your team with a goalkeeper, defender or striker when Arsenal have a midfield that is - and could continue to be - an FPL goldmine? 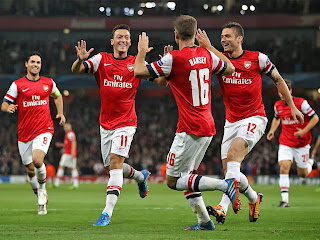 Well, ok, let's discard the last 3 - although Flamini did come on in GW13 and score a great goal. This is the exception, definitely not the norm for him!

That still leaves 6 players that would walk into most PL sides, and who are currently, or have the potential, to score big over the next half a dozen or so GW's when squad rotation is almost an inevitability.

So, who do you pick?

It's impossible not to start with Aaron Ramsey. Who could have predicted what a season he was going to have?!? He has already scored 8 and assisted 4 this season, compared to scoring 7 and assisting 3 during the previous 5 seasons COMBINED. Available for £5.5 million at the start of this season, he will now cost you a staggering £7.4 million and rising weekly. But why am I telling you this? You already own him right? Well, not everybody. Admittedly, an astonishing 60.3% of all FPL managers do, but some of you are still holding out (I'm looking at YOU @matejp23!)

Ramsey is head and shoulders above all other midfielders in the FPL at the moment with an overall score of 94 points (second only to Aguero with 100) and is 5th in the Form table with an average return of 6.7 points per game. He is this years Gareth Bale! What more evidence to you need! Buy now, or forever curse your stubbornness to conform!

Moving on then, you could go for Ramsey's more expensive sidekick, Mesut Ozil. The master of assists with 7 already this season (Hazard comes in second with 5) and 2 goals to his name. Inexplicably, managers have been rushing to offload him recently because he had a couple of poor points returns in GW11 and 12. In fact, nearly 200,000 of you have bombed him out since GW10, despite a decent points return in GW13. This has seen his ownership percentage drop to 28.1% - still the 4th highest of all midfielders. He sits at 6th in the overall points table with 64 points, with an average return of 5.3 points. Personally, I strongly suspect the hurry to sell him is down to the fact that managers have realised that they must find a way to squeeze in Aguero/Suarez/Rooney (or certainly at least two of them). Sacrificing Ozil is probably the only way to do this. For those of you with the cash, you could now pick up a relative bargain. The rush to sell Ozil has seen his price drop from a peak of £10.8 million in GW10, to £10.3 million at the time of writing.

The alternative is to take a calculated risk on what is still (at the time of writing) a great differential. The return to action of Theo Walcott. Missing from GW5 to GW11, he returned for a 21 minute substitute appearance against his old club Southampton in GW12. Picked on this site as Matej's "Called It" for GW13, this looked like it was going to backfire when he was again on the bench and only came on for the dreaded 1 minute cameo. However, this was just enough time for him to provide an assist for Ramsey, a points return of 4, and a 'get out of jail' card for Matej!

In all seriousness though, this could just be the differential you are looking for. His return to the starting line-up could reduce the pressure on Giroud and see Walcott shouldering some of the goal-scoring burden. His ownership is currently at a meagre 3.8% and he costs a relatively cheap £9.1 million. Under 3000 managers have put him back in their squad since his return to action, so is this a risk or a nailed on certainty to jump onboard before everyone else does? Depends how desperate you are to make up some ground I guess...

The next option for you is last season's player of the year (for Arsenal), Santi Cazorla. The Spanish maestro hasn't really picked up where he left off unfortunately. Missing from GW4 to GW7, his only goal so far this season came in GW10 against Liverpool. One assist is also poor, especially when compared to last seasons return of 12 goals and 13 assists. But he is now getting game time, albeit only an average of 70 minutes. If he finds his form he could yet recapture the points return of last year. A decent differential, but I would say riskier than Walcott. He is currently owned by 2.2% of you, but has only returned 31 points to date. The other thing to put you off is his high price of £9.6 million - the second highest overall, level with Yaya Toure and ahead of Eden Hazard.

This brings us onto Jack Wilshire. For a player who is rated so highly (alledgedly) I personally think the only consistency he shows is to annually underachieve as an FPL player. Low goals return, low assists, low points. Currently sat on 34 points with a couple of goals and 1 assist, he is owned by 6.6% of you. Quite high I thought. Again, probably by some undeserved reputation not borne out by fact. Surprisingly, 9634 managers bought him in for GW13, despite absolutely no evidence to suggest he was likely to do anything. Oh wait - he scored twice against Marseille in the Champions League four days previously! One of my personal rules in FPL is to TOTALLY DISREGARD what a player does in Europe, or for that matter at International level for their country. I'd be interested to hear your thoughts.

Your final option is Mikel Arteta. He missed the first 4 GW's but since his return to the starting line-up from GW7 onwards, he tends to complete 90 minutes more often than not. However, a return of 1 goal and no assists is pretty rubbish for a player that costs £6.8 million. Still, historically he provides about half a dozen goals a season, and the same number of assists so maybe worth a punt if you are still searching for that elusive differential. I predict he will do well over the hectic Christmas period, but would I be willing to put him in my team? Not a chance! 1.3% of you seem to think he's worthy of a place in your squad though.

So, in summary, on current form you are probably looking at the League Champions*. So surely it's worth finding space for the maximum number of three in your starting XI? My personal view is that Giroud is finding it tough up front of his own, but Walcott could release some of that pressure. Walcott is certainly a bit of business I am looking at doing in the next few GW's.

There is a school of thought out there that it is "dangerous" to have two players from the same club in the same position. To that I would say Suarez/Sturridge, Lovren/Fonte, Hazard/Oscar?

My own team currently has Koscielny, Ozil and Ramsey in it. I admit to being one of those above mentioned managers who has agonised over ditching Ozil for Rooney, but his GW13 performance just confused me more than ever! Ramsey is an absolute "must have" and has been since GW4. If you didn't have Gareth Bale last year, chances are you didn't finish very high come the end of the season.
Enough said.

How do you solve a problem like Arsenal? Look at the stats, decide if you need a differential or if you can afford to play safe, and for the love of God...buy Ramsey before it's too late!!!!

*I do not think Arsenal will be League Champions!