The identity of the person who invented the wheel remains a mystery to this day, simply because of the fact that it wasn't invented instantly, overnight. It was more of a process. While the oldest wheel discovered dates back to 3,500 BC, it is believed that it was invented already in 8,000 BC. Early men used to place rollers underneath heavy object so that they could move it easier over long distances. Over time, men invented the sledge, placed it on rollers as well and soon realized that the rollers became grooved with use, effectively making it even more effective. This realization led to the creation of wheels and axle in one piece and later on to what we know today.

I have often wondered what I would have been able to show if I was somehow transported back into the past (which is not physically possible, at last according to some guy called Einstein, but let's just assume we can, for the sake of this paragraph) and I had to persuade people I was from the future. Sadly, I realized, not much. Which bummed me out a little*.

The good thing is that I don't have to neither invent nor re-invent the wheel for this week's #CalledIt and I will be going for an "obvious" choice. He went from zero to hero in one GW and secured his interim manager a brand spanking new 18-month contract. Not bad. With Tottenham playing a WBA team that concedes roughly 2 goals on average lately, I believe he has a good chance of adding to his goal tally from previous week AND could help a certain Spanish forward re-emerge as a viable FPL choice. A former FPL heavy-weight, this week's #CalledIt, Emmanuel Adebayor!

With Mirallas in GW16 and Welbeck in GW17 I will be looking to make it a 3 GW streak this week. And, if Welbeck slots back into the Manchested United starting 11 this GW, he could potentially add to his latest emergence in FPL. At least until RVP is back. But by then you will already have your wildcard to play with.


* I have added "Learn how a radio works and build one from scratch" to my bucket list. While it may not work in 1256 AD, it could still look cool. Does anyone where I could get some electricity back then? 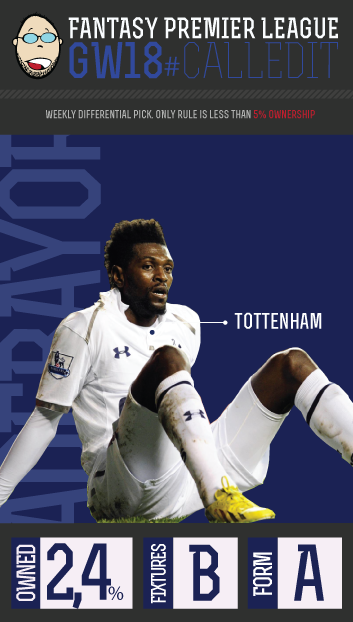