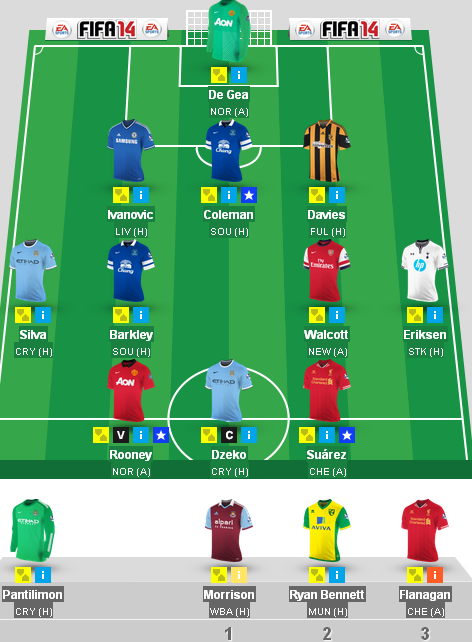 Ozil & Ramsey: OUT
Walcott & Eriksen: IN

I scored 74 and 68 in Gameweeks 16 and 17, which somehow merited red arrows.  I then bagged 43 in Gameweek 18 and managed a green arrow (& a 6k rise)!  That may sound funny, but I also crashed out of the #FPLCup on a tie-breaker.  A surprise victim of the so-called "Boxing Day Massacre".  To lose in the first round of the cup is like being bowled out for a golden duck in an Ashes match or like losing to a non-league team of amatuers in the FA Cup.  Ah well, you live and learn!  Can't say more than that on this front.

Gameweek 19 is due to start on Saturday and inevitably players will be rested or subbed off early.  This made transfers all the more difficult, especially when Ramsey, Flanagan and Morrison are either major doubts or ruled out all-together.  As a result I was forced into another -4 hit.  My so-called "Ozil-Ramsey" fantasy football tandem yielded a lot of points from September to December, but I feel that has now come to an end with the Welshman's injury.  In some ways the forced transfer is a good thing as I don't like doubling up with players from the same team in the same position - Their partnership was an exception to the rule.

I decided to buy Walcott in place of Ozil as the former is cheaper in price.  The latter is also due a rest.  As for Ramsey's replacement, I had to look carefully and the only person that seemed viable was Eriksen.  The young Dane has fine attacking prowess and his first goal for Spurs on Boxing Day could be a sign of things to come.  Spurs seem to have a good run of fixtures and I think it's worth me taking a chance on him.

As for my captain, it may come as a shock to you that I have chosen Dzeko.  This could spectacularly flop or work wonders for me.  I was going to give the armband to Silva, but I think he may not play a full match.  As for the Bosnian, he is due a full 90 minutes of PL action and may just get his chance against Palace.  His ownership is a mere 4.4% and he could be a one-off super differential of a captain.  I have nothing to lose following my #FPLCup exit and feel bullish, thus I will take a chance on him.  The last time I captained him was against Hull when he scored 1 point, but I won't let that put me off!  Let's hope for better things.  Bring it on!
Posted by fplhints