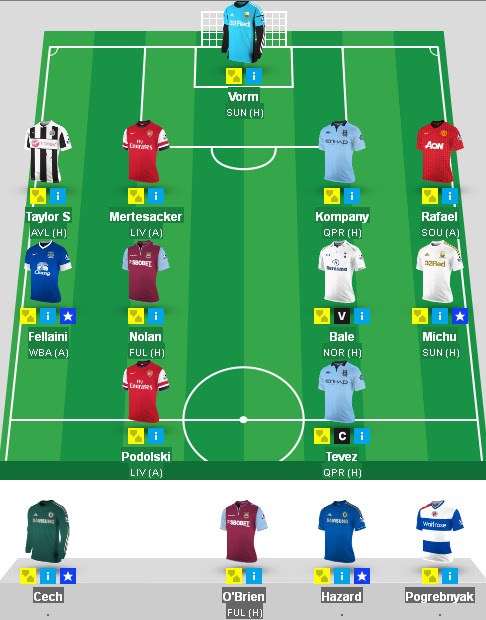 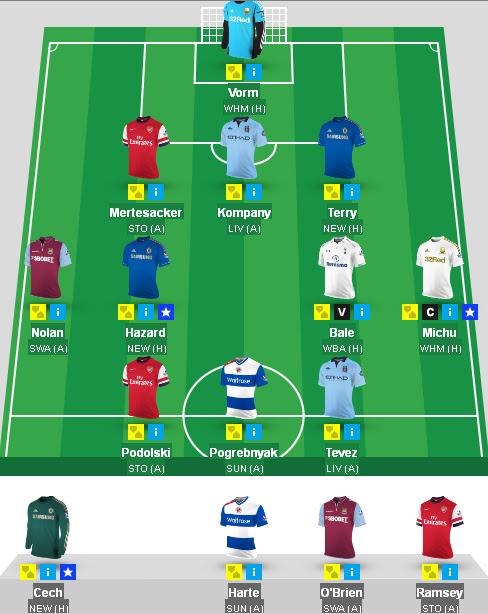 
Michu on-song in Spain
No wonder Laudrup signed him

3rd Arsenal (+0):
May surprise many pundits with a shock title challenge via rebuilt team and ethos.

4th Chelsea (+2):
Have bought/sold over the summer, but their strike force is weaker than their rivals.

5th Tottenham (-1):
AVB has a point to prove and may do so with Spurs, but unlikely to finish higher than 5th.

7th Newcastle (-2):
Should carry on where they left of last season, albeit with a harder challenge at hand.

8th Swansea (+3):
Laudrup's new signings have gone under the radar and could challenge for a European spot.

10th Sunderland (+3):
O'Neill-inspired-Sunderland have a solid midfield that will carry on improving.

11th West Ham (n/a):
Could Maiga be the new Ba? Perhaps.  The Hammers have enough quality to shine.

13th Fulham (-4):
If Dempsey leaves they could be relegation candidates.  If he stays, another mid-table finish.

14th Wigan (+1):
The Latics got out of jail late last season.  Kone's skill could be the difference this time around.

15th QPR (+2):
Despite some high profile signings expect them to be bogged down in the lower half of the table.

16th Aston Villa (+0):
Lambert hasn't done a complete overhaul as of yet. Bent's goals could just about save them.

17th Norwich (-5):
Exceeded expectations last season. May have just enough in the tank to stay up again.

19th Southampton (n/a):
They have a few glints of sparkle in the squad, but it won't be enough for survival.

20th Reading (n/a):
Unless they play as a team and punch above their weight they are heading straight back down.
Posted by fplhints 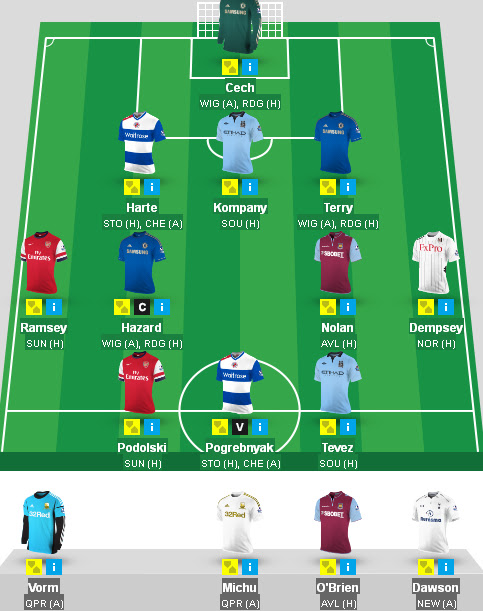 Hazard showing his money's worth
(Apologies for the awful sound track!)

We are pleased to announce that FPLH will maintain the regular private league competitions for 2012/2013, which will be complemented by the innaugral Player Exchange league.

The invite codes are as follows:

All abilities welcome.  No restrictions on the number of entries.

The league and cup both start in GW1.

Hi all, I'm back from my FPL holiday!  The batteries have been recharged and I am ready to go!  Here is my first FPL article of the season*:

*Please note that the selections merely highlight some potential players, as opposed to conveying a definitive list.

Watch: Lukas Podolski
- Proven goal scoring talent for FC Koln and Germany
- Will be the new RVP if Van Persie leaves Arsenal during the transfer window

Ignore: Andrey Arshavin
- Low down the pecking order in a saturated midfield
- Could be sold or sent on loan before the close of the transfer window

Ignore: Shay Given
- Past his peak and unlikely to keep many clean sheets
- Better equivalent priced alternatives available

Watch:  Eden Hazard
- Will be Chelsea's main attacking threat from a heavily packed midfield
- Could prove to be the X-factor in a transitional team

Ignore:  Mikel
- His cheap price is indicative of his poor value
- Is unlikely to score goals or feature as a definite regular

Ignore: Shkodran Mustafi
- Cheap value, but a backup first team defender
- Better off purchasing a cheap defender that is likely to play regularly

Ignore: Damien Duff
- Unimpressive at Euro 2012, past his prime and over-priced
- Could be a squad rotation risk

Ignore: Charlie Adam
- Hasn't proven his true class since his move from Blackpool
- Could be consigned to intermittent first team appearances

Watch:  Mario Balotelli
- Made his name last season and during Euro 2012
- Provided he keeps a cool head, he could become City's most important striker

Ignore: Adam Johnson
- Over priced for the amount of minutes he has played over the past four seasons
- Definite squad rotation risk, despite goals/assists potential

Watch: Hatem Ben Arfa
- Subject to playing often, he will be involved in Newcastle's goals
- A proven match winner that isn't afraid to dribble with the ball

Watch: Ji-Sung Park
- Proven work-rate during his time at Man United
- A relatively decent player in a mediocre team

Ignore: Jordan Obita
- Has never played a league match for Reading
- Very unlikely to feature as a regular in the first team

Ignore: Cameron Jermoe
- Only scored four goals and played less than a thousand minutes last season
- Unlikely to make an impact or play 30+ league games during 2012/2013

Watch: Ji Dong-Won
- Provided he gets a chance in the first team, he could be a bargain priced attacking threat
- For a young player he has a significant amount of international experience for his country

Ignore: Ahmed Elmohamady
- Played a fractional amount of time during 2011/2012, following his debut season
- Unlikely to make an impact or play 30+ league games during 2012/2013

Ignore: Sandro
- Defense-minded and goal-shy midfielder
- Unlikely to be involved with Tottenham's goals

Ignore: Sam Mantom
- Has never played a Premier League match for West Brom
- Unlikely to make an impact or play 30+ league games during 2012/2013

Watch: Joey O'Brien
- Plays in defense but can also play in midfield
-  Bargain price, definitely worth an option as a cheap defender

Watch: Ali Al-Habsi
- Made many key saves as he helped save his team from relegation last season
- Ideal capability and price for a second substitute FPL keeper

Ignore: David Jones
- Was a squad rotated player last season and didn't score any goals
- Unlikely to make an impact or play 30+ league games during 2012/2013
Posted by fplhints