It just wasn't meant to be for my #CalledIt pick for GW18. It seemed so right, so perfect that I was certain Adebayor will deliver at least an assist, if not a couple of goals. Instead, it was a former #CalledIt pick, Christian Eriksen, who stole the spotlight and scored his first goal in Premier League. While I believe that the latter is also a good option for this week, as he is owned by only 1,7% of managers and his price is down to 7.1m, I want to look elsewhere than Tottenham this week.

Enter Manchester City. Playing against Crystal Palace. At home. Yum. As good of a fixture as there can be. On top, City played their last game yesterday and are sure to rotate a couple of players. I was tempted by Jesus Navas (owned by 2,7% of managers) who delivered two assists and a goal in the last three GWs, but decided to keep Chief company and select the player he put the armband to this week. We all know he can score goals and he started this (pre)season on FIRE. With Aguero and Negredo forming a formidable tandem, he didn't get his chances, but I believe he might get his shot tomorrow. Or two, for that matter. If he does, he should score. #CalledIt pick for GW19, Edin Džeko. 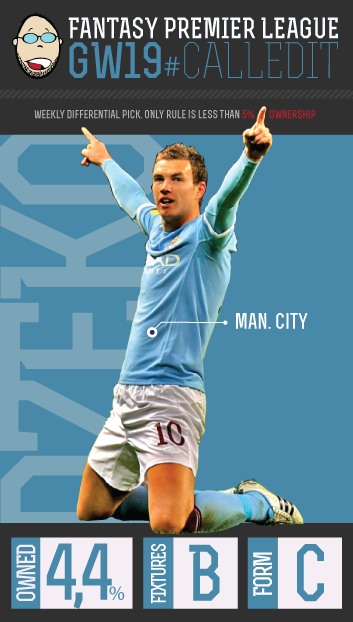