IMPORTANT ANNOUNCEMENT: Until GW15 all #CalledIt picks were owned by less than 5% of FPL managers and were unique picks (meaning they could be selected only once). As this was limiting potential good selections in the process, we decided to change this rule. Effective as of GW16, players can be re-selected as the #CalledIt, however not in the 3 GWs following their previous selection.

Having said that, guess who's back? The little Spaniard who creates chances with his eyes closed (reminds me a little bit of a football Magic Johnson) and also scores some beautiful goals when he decides to do so - David Silva! After an impressive showing in midweek clash with Bayern Münich and a come back from behind victory, surely he must be in your plans for this week? Granted, Manchester City play Arsenal, but a) they play at home and b) Arsenal (from what I hear) looked really poor in their defeat in their midweek game against Napoli and could have conceded even more than two goals. But that would be just weak, using the new rule immediately. Unwillingly, I resign from him as my pick (though I do believe he will inflict some damage).

No, this week I decided to go with the guy who was supposed to be my ticket to another magical FPL year that would see me back in the TOP 100 after the last whistle of the season sounded. This year's Michu. Well, it wasn't meant to be. We parted ways after GW6 after he really failed to live up to the pre-season hype. But with Everton's fixtures looking really sunny, it is time to let him go for another round on the merry-go-round and disappoint me once again. The #CalledIt for GW16, Kevin Mirallas! 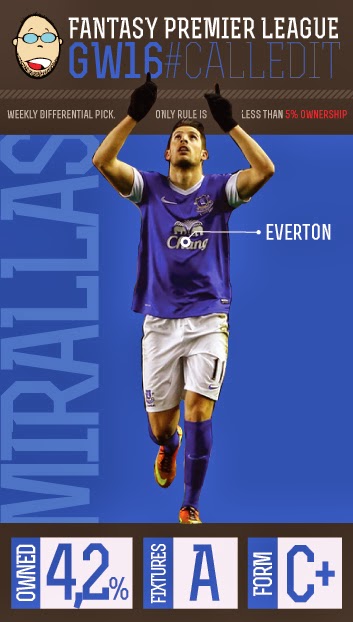 If you are wondering what Kevin is pointing to, I would have to guess that he agrees with my #CalledIt pick for GW16. OR, he might be praying to the fella upstairs that his start is not endangered by a certain Deulofeu character...