How Do You Solve A Problem Like...Southampton's Defence?

It has been coming. You can't deny it any longer. You've been burying your heads in the sand for a few weeks now, but it's time to face facts. Southampton's defence is not what it once was. You've loaded your FPL team up with a couple of them (maybe even 3 before the injury to the goalkeeper forced your hand in GW13?)

So what has gone wrong, if anything? Is this just a blip, or is it time to ditch those Saints defenders before they cause real damage to your team? First of all, let's remind ourselves why it was - until very recently - considered essential to have representation from the south coast club in your back line.

An opening day victory and a clean sheet away at West Bromwich Albion may have made you raise an eyebrow, but I doubt too many serious FPL managers went steaming in to use their free transfer to bring in a Saints player. Well, 36,000 of you did so kudos to you for jumping on the bandwagon early.

A draw at home to a poor Sunderland side in GW2 could not have given any clue as to what was about to happen. An amazing run of 7 matches with only 1 goal conceded - and that was away at Old Trafford in the 1-1 draw against the League Champions.

Incredible stats, with the standout performance being at Anfield. Following that match the bandwagon was in full steam ahead mode.

But inevitably in FPL, the wheels will start to fall off. It could be off the back of a bad result, an injury to a crucial player, or just as a result of vertigo as the players of so-called "smaller clubs" start to get a little dizzy looking down the League table from their lofty position?

It started off slowly, with a 1-1 draw away against Stoke in GW10. A big victory in the form of a 4-1 win against Hull followed in GW11. Next up was Arsenal at the Emirates. A 2-0 loss. Chelsea away. A 3-1 reverse. Aston Villa at home in GW14, a 3-2 loss. And at the weekend, against Man City at home, a (creditable) 1-1 draw. But no clean sheets since the win against Fulham at the end of October.

Worrying? It should be. If you are sticking with your Southampton defenders then you need to try and work out where the next clean sheet is coming from. Coming up in GW16 they face Newcastle (and Loic Remy) at St James' Park. Then Spurs at home, followed by Cardiff away 4 days later on Boxing Day, Everton away 3 days after that before Chelsea at home on New Years Day. So take your pick? Where do you see clean sheets being picked up there? It's not exactly a great run of fixtures.

To make matters worse, the collapse in form has coincided with the injury to one of the most consistent goalkeepers this year, Artur Boruc (16.3% ownership, but over 220,000 managers have transferred him out since his injury in GW13). With an unknown return date, this has seen his understudy, Paulo Gazzaniga, take over between the sticks. And not really do anything special so far.

In front of him, what was once a solid dependable defensive unit has struggled recently. And this is where your problem lies. Ownership stats(at the time of writing) show that it is likely you have at least one of these four:

Clyne sat out the draw with Man City in GW15 but is predicted to be back for the Newcastle game in GW16. 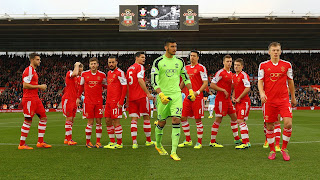 So as you can see, they are still popular choices, despite the poor points return for all of them since GW9. Even the price of them isn't as attractive as it once was. As ownership went up, so did price. But for every week they fail to keep a clean sheet, ownership and price fall.

Is it worth keeping hold of them? Your call obviously. They are all good players. Despite the lack of clean sheets they don't often concede many. But how many is too many? The upcoming fixtures don't make for great reading and it would be hard to predict too many points coming their way between now and GW21 when they face West Brom at home.

What else can you get for your money then? Crystal Palace are on a run of exceptional form. In 4 of their last 5 games they have kept clean sheets. You could afford any of them. But don't be hasty. They face both Chelsea and Man City away in the next 4 games. Tottenham defenders may be worth a look. After Liverpool in GW16 they face Southampton (A), West Brom (H), Stoke (H), Man Utd (A), Crystal Palace (A). Some potential clean sheets in there surely? Especially at Old Trafford these days...

For me though, I can't look much past Everton. Scintillating form and defensively tight. Seamus Coleman is the same price as Lovren. For another 0.1m you could have Phil Jagielka. Costing 0.2m LESS than Fonte is Sylvain Distin. I think it's a no-brainer. They have got some sweet looking fixtures coming up as well; Fulham (H), Swansea (A), Sunderland (H), Southampton (H), Stoke (A), Norwich (H).

How do you solve a problem like Southampton's defence? Personally I'd ditch them. For a not too dissimilar price you could load up with Everton defenders. You'll thank me come New Years Day. I guarantee it*

*As in life, there are no REAL guarantees.