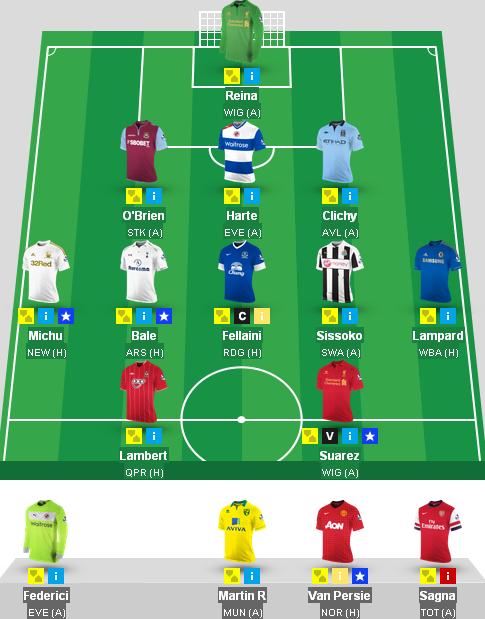 Before I waffle on about how lucky I got with damage limitation last week and this GW's team I must say...

Due to FA Cup fixtures, the likes of Everton, City, United and Chelsea will not play Premier League football.  8 teams will be affected in total.  Some of them could play in a super-extended GW29, but that is unlikely.

As for GW 27, it was disappointing.  My Tri-Reading connection failed with Pog getting sent off.  Lamps missed a penalty which further diminished my score.  Buy my recommended player/one-time bogey player didn't let me down - Bale's brace and Joey O'Brien's assist bailed me out on Monday night and doubled my score from a paltry 19 to 38! #damagelimitation

For this GW, I almost thought of selling RVP, due to his injury and no-show for GW29.  In addition, with United's involvement in the FA Cup and Champions League, his PL impact will be limited.

I decided to sell Walcott as I felt that he is being drowned out by the likes of Cazorla, Wilshere, Podolski and even Giroud.  Walcott may have shown form in December and January, but I feel the time is right to sell him.

I decided to draft in Sissoko this GW with GW 29 also in mind.  His stunning form since joining Newcastle can't be ignored.  At sub-7.0 he is a steal.

I couldn't stand relying on one striker, even for one GW.  That's why I decided to cut my losses with Pog and bring in Lambert.  12 PL goals, with 2 goals and 3 assists shows his calibre.

I believe Lambert will be the reason why Southampton will avoid relegation.  Their match v QPR is like a Cup Final and I think he will once again shine.  Southampton are also due to play in GW29. 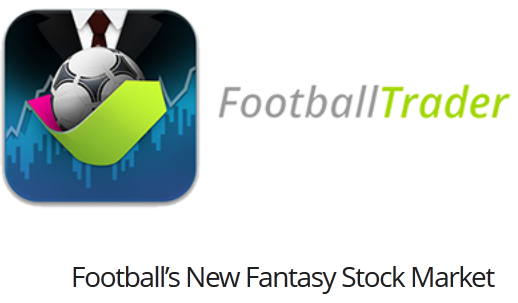 In the past week's we have heard some buzz on Twitter about a new Fantasy Football game that is launching. In fact, we just heard today that Football Trader has just gone live with it's Beta game, meaning anybody can now play it! We ourselves were invited to try the game last week, and we really liked what we saw.

Football Trader is a new type of Fantasy Football game where you Buy & Sell shares in players on a live stock market called the PlayerDAQ. Unlike most fantasy football games, this is played in Real-time, meaning the price of players is changing constantly based on users trading on the market and also player performances.

Every user starts with £100M budget and the goal of the game is to Grow the Value of your Players, and therefore your Team, as much as you can.

What makes the game different to traditional Fantasy Football games is that it's all about investing in players, as opposed to picking a team for the weekend. Finding good value in players is something a lot of FPL players look for, but this is always outweighed by having to look to pick players who we think will score or assist or keep a clean sheet. In Football Trader, you look to Invest in players and sell them when you think their value has peaked.

You also get Match Dividend Bonus cash added to your cash balance after the weekend's matches that gives you extra money to buy more shares in players. This dividend is based on how your players performed in their matches. What we liked about the game when we tried it was the Live historical graph feature and also Breaking Player News, we haven't seen something like this before and is something that should go down well.

The Beta game is now open Live for users to play till the end of the season.

Users can play the game on the link below on their mobile or on web. Football Trader plan to launch native apps very soon. 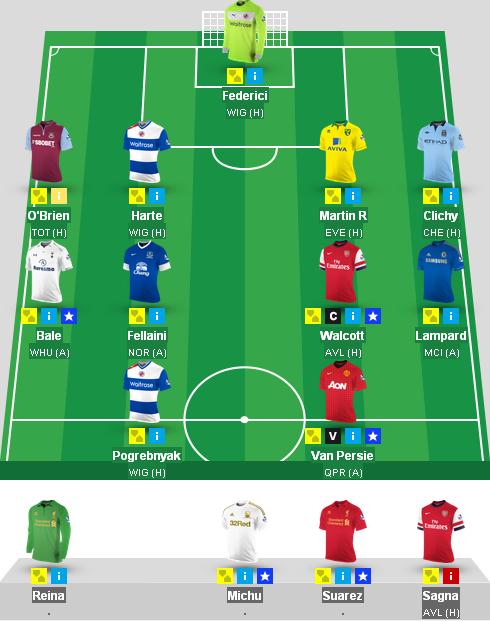 In GW 27 we see the absence of Liverpool and Swansea players, due to their fixture being played a week in advance.  Luckily I have enough players to field a starting XI without taking a -4 hit.  It means that I am playing all three of my Reading players who have a decent-ish match v Wigan.

I decided to sell Gerrard for Bale, in part due to various Liverpool attack-orientated players hitting form. The emergence of Coutino and solidification of the Suarez/Sturridge combo could push Gerrard into a less attacking role.

Despite Bale's form, I have captained Walcott due to Arsenal's easy fixture at home to Villa.  They may not have had much luck in the FA Cup and Champions League, but will be wanting to prove a point or two to their detractors.

Transfers: Begovic - OUT / Reina - IN 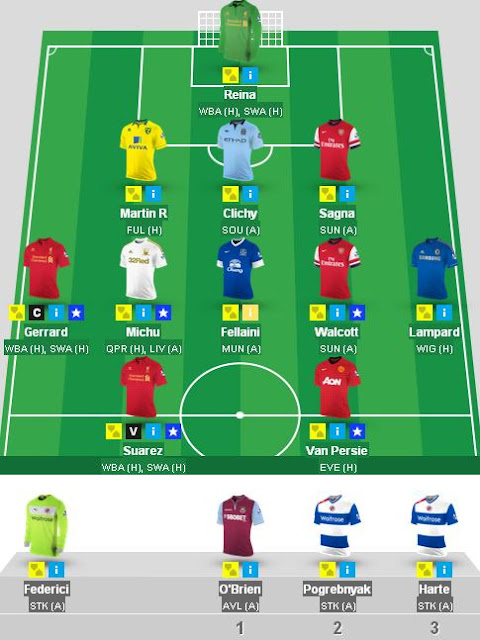 I am pleased that my risk of benching Suarez paid off last GW.  It was just a shame that my other outfield subs bagged 12 points between them and that my last minute captain switch from Fellaini to Walcott minimised my overall points haul.  Either way, 70 was a good tally for last GW and I shouldn't complain too much.

For this GW I have decided to make only one change.  I sold Begovic for Reina, due to it being a DGW for Liverpool and Swansea.  Reina has had much stick of late but he is due a few more clean sheets and good matches.  In addition the combo of Reina/Federici seems to be potentially viable for the next two months.  I already have Gerrard, Suarez and Michu so didn't need to take any hits.  I didn't want to go over-board with Swansea players as I think some of them may be rested with the League Cup final due soon.

As for the captain's arm band, I decided to give it to Gerrard due to his good form.  Suarez was an option but I feel he has been cancelled out by Sturridge and Michu hasn't done well of late. 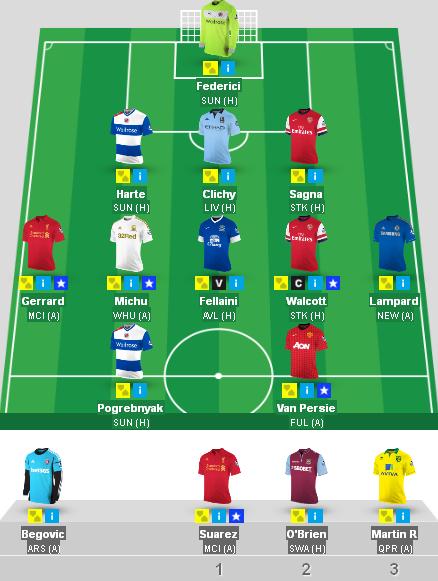 With the passing of another January transfer window, we saw an array of real life transfers ranging from the obvious to the knee jerk.  Samba for £12.5M? He won't be worth half that in FPL!  Not that it affects my team for this GW.  In typical FPL fashion I followed up a cracking GW score with one of my lowest GW scores for this season.  I rarely score sub-40 and for it to happen after the use of my WC sucks.  Ah well...

For this GW I have decided to take a few calculated risks.  I am playing all 3 of my Reading players in the hope that they can maintain their good run of form with a clean sheet to boot.  It means that I am benching Suarez, but I feel he may be due a 2 point game as he will face up to Man City at the Etihad. I have also decided to bench O'Brien as punishment for his own goal and also due to the fact that West Ham's defence can be leaky.  In fact I may even sell O'Brien and re-sign Davies for GW26, but will wait and see.

With GW 26 being confirmed as a DGW, due to the League Cup final the week after, I decided to take no transfer hits.  The only change I made was to bring in Sagna for Rafael.  Why? you may ask.  I feel Rafael isn't value for money at the present time.  He is being outdone by the more expensive Evra in the attacking department.  In addition it seems United aren't bothered by clean sheets with de Gea in goal - they will gladly settle for 2-1s, or 3-1s so long as they win.  Signing Sagna may appear odd as Arsenal haven't kept many clean sheets of late, but they have a good run of upcoming fixtures as follows:

I plan to use the extra money on purchasing Reina for DGW26.  Sagna could also be a fail despite the aforementioned run, but at least I am not paying over the odds for him.  My captain for GW 25 is Walcott, based on the fact that he is on form with Fellaini as vc.  Stoke have recently been a difficult nut for Arsenal to crack, but their defence has been shabby of late, where as Arsenal have a good goalscoring record at home.