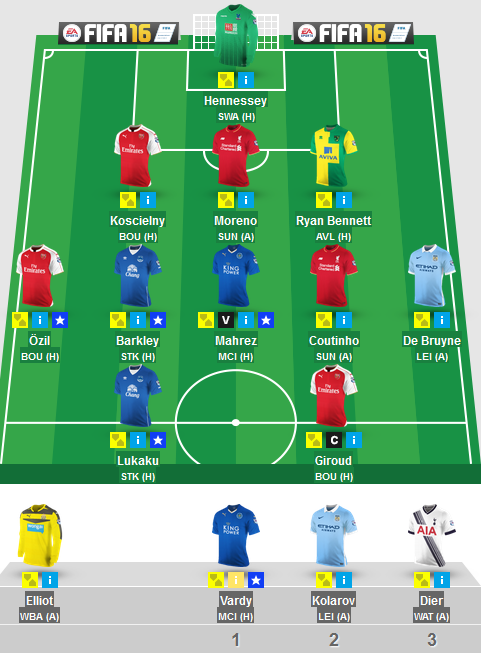 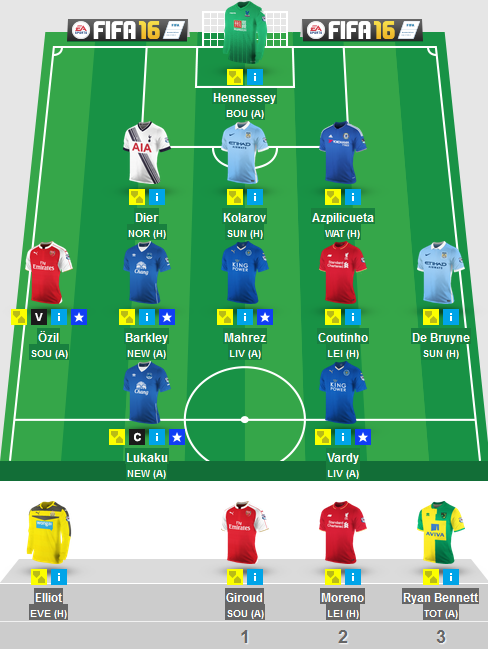 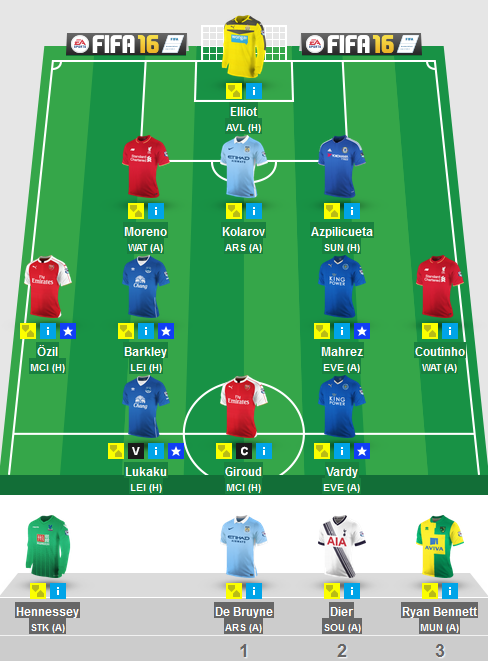 
Lingard and Kane OUT

The season thus far has been nothing but a roller coaster for my FPL team, which has complemented the unpredictable trends in the league - rise of Leicester and fall of Chelsea to name but two things.  Form truly has been key.  Class hasn't mattered a jot.  Differentials have proven to be frivolous, whereas as template teams have emerged as being shrewd.  My team is bouncing between 500-900k and I have nothing to lose. I will go with the flow but also do my own thing.

City's rotation last week cost my FPL team a lot.  I effectively wasted a transfer on Kolarov and lost a few points with Bennett as my third sub.  Looking ahead I decided to re-buy Mahrez as everyone owns him!  I can't risk not having him anymore due to his high ownership.  Selling Lingard made sense as I needed to beef up bench for the busy fixture period.  I guess, it's my other transfer that is the bigger surprise - OUI, I have finally forgiven Olivier Giroud after his Boxing Day antics and bought him back in to my team!  I genuinely thought I would never do this, but I have and here's why:

I am fully aware that there are better captain picks than Giroud but his form has been scintillating of late and he will want to prove a point against City after some lacklustre performances against bigger teams this season.  In addition, I have decided to bench de Bruyne as he hasn't scored or assisted in his last 3 away PL games, but will start Kolarov as i think he can offer more than Dier and Bennett in Gameweek 17, even if it isn't a clean sheet.  Here's to hoping.

Two members of Togga’s writing team recently agreed to a deal in the site’s Writers’ League: John sent out Aaron Ramsey and Xherdan Shaqiri and received Cesc Fabregas and Erik Lamela from Emmett. The players involved have been controversial from a fantasy perspective, so we thought we’d share some of their respective ideas.


The idea of this deal came about when Emmett sent a message out to our Slack group asking if anyone wanted to make a trade for a Chelsea player, as he was attempting to divest in the club.  Chelsea’s poor start to the season, and the nebulous distinction of Fabregas as one of the key players contributing to their demise, has done a lot to poison the well regarding perceptions of Fabregas’s performances, but are those perceptions realistic, or does their inaccuracy make him buy-low candidates?

While Fabregas has been pretty solidly at or above par for an eight-team league, he’s been harmed by Chelsea’s lack of team success. He has almost the same counting statistics as he had in the second half of last season, but far fewer points as he hasn’t earned the clean sheet bonus. Cesc has also, in an ‘off-season, already racked up 24 chances created (23rd among Togga players). If that number was borne out in other statistics, he’d again be among the best Togga midfielders, but he’s only had two of those 24 chances converted into goals–Wes Hoolahan, on the other hand, has created 22 chances, and earned five assists.

Chelsea are certainly in poor form at the moment, and Mourinho may need to be shown the door. But the level of talent at the club can only be muted for so long. The January transfer window, at the very least, will see a capable striker (rumors of Zlatan Ibrahimovic) come into the club and give Cesc someone more reliable to fire passes into. If Fabregas had been playing with reliable finishers and had a total of, say, six assists instead, he’d have added 20 points to his season total and likely made the deal a non-starter.  This being the case, the bigger concern for me is Cesc’s career trajectory after the Christmas period. It’s become a recurring trend that the former Barcelona man’s form spikes and then goes on a gradual decline when Saint Nick goes on his world tour. I needed to pull the trigger now to minimize the long-term risk of the deal.

Click here to read the full article
Posted by fplhints 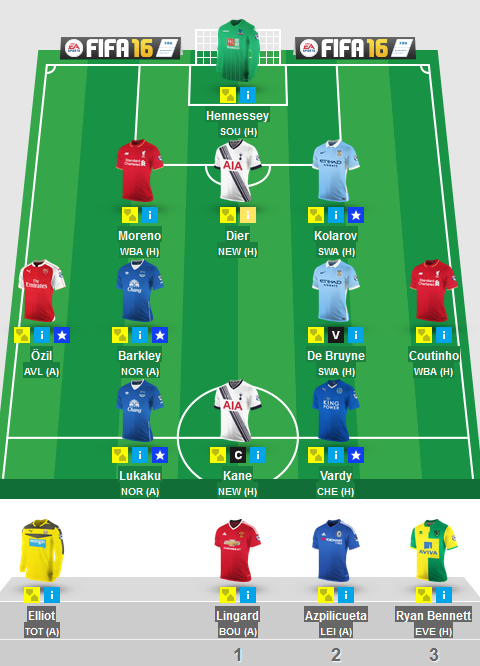 Rojo and Deulofeu OUT
Kolarov and Coutinho IN
CHIPS USED: 0

It goes without saying, Gameweek 15 wasn't nice for my fantasy football team.  40 net points was well below the average and Mahrez's hat-trick didn't help, that's for sure.  All in all, the gains from the previous Gameweek were eroded with a 300k OR fall.  Time to invest in higher ownership players...

Looking to Gameweek 16, I could have panicked and bought Mahrez in the unlikely hope that he would bag another hat-trick.  I think that train has sailed and Leicester will struggle to score 2+ goals a match in the weeks ahead as their fixtures get tougher.  I even considered selling Vardy for Giroud, but I'm happy to wait two more Gameweeks before I do so. I was close to selling Lingard for Silva, but that would have forced me to bench Vardy.

I decided to buy Coutinho as I think he's close to 100% fitness and has a good run of upcoming games.  In addition, his form (pre-injury) was scintillating. I needed an attacking Liverpool player in my team - he made sense.  In addition, Dier may be a doubt against Newcastle.  But I have retained him as he could still be fit for Sunday.  I wanted to sell Rojo but in truth there weren't many viable alternatives.  I opted for Kolarov in the end due to his attacking prowess and City's fixtures.  Yes, City are prone to conceding goals without Kompany, but I feel that Kolarov has a spark about him - as well as high ownership.

Finally, I decided to captain Kane as he was rested on Thursday and Newcastle United's away record is abysmal.
Good luck to you all!
Posted by fplhints 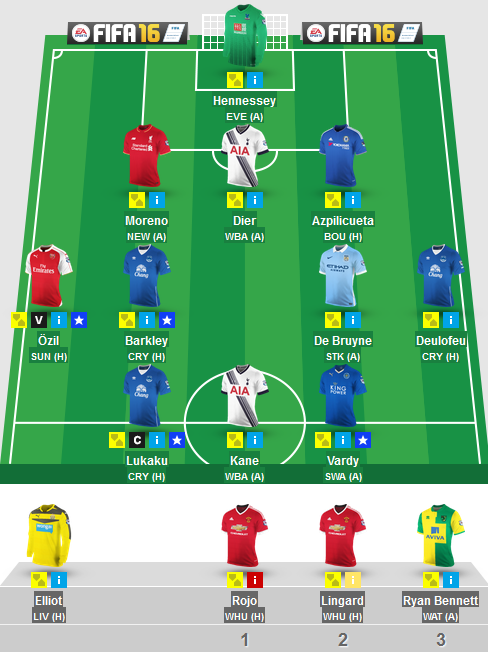 
An activated wildcard at the optimum time can make a massive difference in FPL. I accrued 146 net points between GWs 13-14 (+500k OR rise) post-wildcard, whereas I only scored a paltry 134 points between GWs 10-12 (-350k OR fall).  Having said that, if I bought Barkley instead of Deulofeu before Gameweek 13 I would have been 24 points better off.  I am not too fussed as 8 out of 11 of my team bagged fantasy returns last weekend allowing me to score well above the average.
Sanchez's injury gave me an opportunity to re-jig my midfield and I decided to make a bold move as Barkely was due to increase in price after Tuesday night and Sanchez due to fall.  I already had Lukaku and Deulofeu but I simply couldn't ignore Barkley.  I decided to take a calculated risk and purchase him due to Everton's scintillating run of games between GWs 15-20.  The Toffees have been scoring for fun and the fact that I have 3 of their best attacking players (bargain cumulative value: £22M~) is a boon as not many FPL managers would take such a risk with this tripartite combination.  Honourable mentions should also go to Hazard and Silva.
I could have also replaced Rojo (injured) with my other free transfer, but I'm happy to start Dier instead.  In terms of captaincy, I considered Ozil but was worried about "Big Sam's" recent defensive successes.  De Bruyne was also viable, but he's playing away.  It made sense to pick an Everton player.  I am aware that Palace have a good away record this season, but I think the match on Monday has the potential for lots of goals.  I also look forward to the prospect of having 4 MNF players in Gameweek 15.

Will you bite the "Bark" to "Serge" up the rankings?

You can also listen on iTunes.