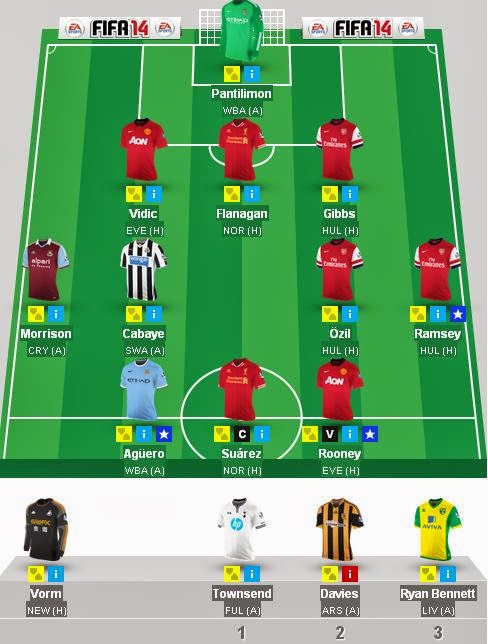 I had Ozil. I had Ramsey. I had Rooney. I captained Aguero... and he had a paltry 1 point game!  GW13 started stupendously for me when my Arsenal contingent bagged me lots of points.  Alas, all that was missing was the cherry on the cake - captain's innings - but it wasn't to be and my sub3 was R Bennett who bagged 8 points.  Despite my team scoring 65 points on average during the last 6 Gameweeks, I am far from content.  I have yet to experience the "perfect" GW this season (captaining the highest points scorer + the rest of team doing fantastic).  I guess it is something still to aim for.  Getting a ton would be nice too.

As you all should know by now, GW14 is starting on Tuesday to accommodate for the annual Premier League fixture jam.  I was tempted to tinker with my team.  But it seems fine on paper and I wouldn't mind the free transfer for the GWs ahead.  I think a lot of the regular FPL popular picks won't play a full match in GW14.  As a result, it's best not take any transfer hits for such an unpredictable Gameweek.  I have decided to captain Suarez, despite him firing blanks on Sunday (+ no Sturridge).  Liverpool need a win against Norwich to stay in contention as title challengers.  Suarez as the sole goal threat is surely a favourite to score.  Then again, the Aguero fail on Sunday doesn't bode well for me, but I will take my chances.  I just hope Townsend doesn't bite me from the bench!
Posted by fplhints