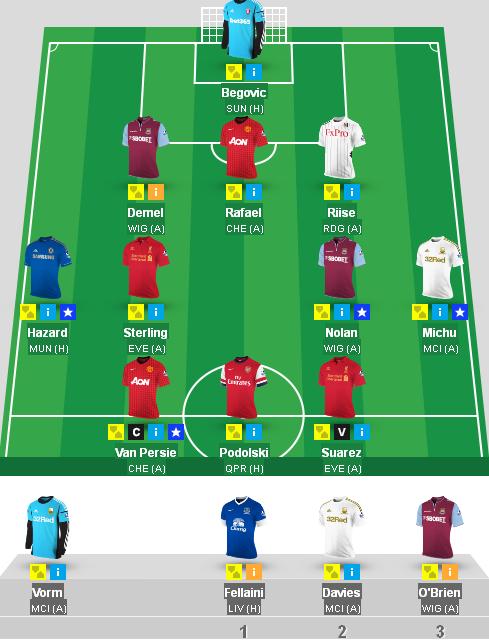 Following a bumper Gameweek 8 you would think that my team selection for Gameweek 9 would be easy?  Well no!  After much toing and froing I have decided to only make one transfer, which may come as a surprise to some.  I have sold Cech and brought in Begovic.  Despite Chelsea being top of the league they haven't kept many clean sheets.  With Terry's suspension I don't think that task will become easier for them.  Thus I decided to cut my losses and bring in a cheaper alternative.  Begovic appealed to me due to Stoke's dogged defensive "park-the-bus" system.  Moreover their upcoming fixtures are fairly kind to them as follows:

I can't stress how much I pondered over the second free transfer.  Defoe was an option, but I was worried he might tire after his European encounter.  Berbatov, Ben Arfa, Crouch, Aguero and Lennon were of interest too but I wasn't fully convinced.  I really want to get rid of Podolski but have decided to give him one more chance v QPR.  Fellaini has also lost favour with me, but I will bench him for now.  I then thought of beefing up my defence, but the overall lack of clean sheets this season was a put off.  In the end I opted to maintain the free transfer, despite the lack of captain options in my first XI.  I decided to captain Van Persie (even though he will face up to Chelsea), as he is a big game player.  Remember his hat-trick at Stamford Bridge last season?  I doubt I will score 80 points again for Gameweek 9, but never say never... 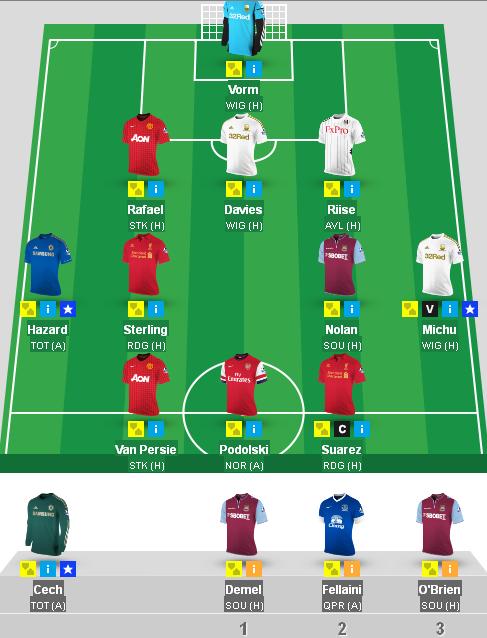 After a few below par Gameweeks you may think that I would radically tinker with my team.  Not so.  I am confident that I can bounce back in Gameweek 8, especially due to the fact that 9/11 of my first team players are at home.  The only change I have actioned for this week is to sell S Taylor (a doubt) with dodgy upcoming fixtures for the ever attacking JA Riise.  He may not be a prolific goalscorer from defence as he was at Liverpool, but his attacking prowess still exists.  In fact he has assisted in his last two league matches.  I am confident he can obtain more FPL points in the upcoming weeks due to the aforementioned fixtures:

Despite Suarez diving a fair bit and failing to score versus a dogged Stoke, I have decided to captain him again as he faces Reading's leaky defence.  The vice captain is Michu as I feel that he too can take advantage the Latics touch and go defence.  Let's hope for the best this time around!

Has assisted twice in his last two league matches

Transfers (OUT): Mertesacker
Transfers (IN): B Davies 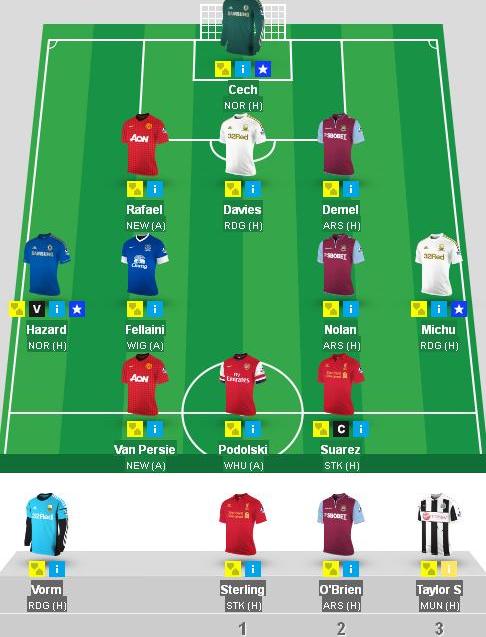 Last Gameweek saw a mild improvement in fortunes for the FPLH Blog Team, with a third consecutive net points increase.  The Suarez transfer proved a masterstroke as he bagged 20 points, if only I dared to captain him.  As for Gameweek 7, I didn't wish to tinker too much as the international break will be shortly upon us once again.  I was looking to replace Mertesacker, who is no longer a first team choice, for a cheaper alternative.  Ben Davies of Swansea came to mind, especially due to his team's upcoming fixtures:

Swansea haven't kept a clean sheet since August, but I believe they are due one soon against teams that do no travel well.  Ben Davies has had a look since Neil Taylor's long-term injury and I believe he will provide value for money.  As for my starting XI, it is almost the same, but I have ditched S Taylor to the bench as Newcastle face Manchester United and have given Ben Davies his place.  The choice of captain was a tough call between Suarez and Hazard, but I felt form was on Suarez's side thus I opted for him.

Liverpool are due a home win, Stoke have yet to win away
Has no major rivals for his position in the team
Scored 5 league goals in 6 matches
Is a natural goal poacher