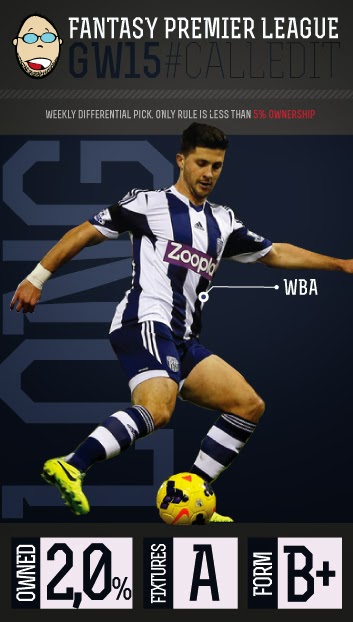 Despite the fact that Shane Long seems like a non-brainer this week, he wasn't my first pick this week. Not even the second. But it seems that I have somehow either missed the fact that my picks are more than 5% owned (can you say chicken brain?) or so many people realized the same thing and brought them in. Whatever the reason might be, we move ahead as if nothing happened, just like Tom Hanks said in a movie once: "Are you crying? There's no crying in baseball!". And the same applies for football. Or soccer, whatever you wanna call it.

WBA play Norwich at home this week and Norwich have conceded 14 goals (!!!) on the road in the last three away matches. While he might not score 4 goals like Suarez, if he plays, he should be good for one or two. On top of that, WBA have a fairly nice schedule in the next two with Cardiff City (A) and Hull City (H) following. Three nice fixtures for Shane Long, #CalledIt for GW15.

As an honorable mention, I would like to turn to Manchester United. I know, they are in horrible patch of form and Rooney is out, but I believe that they will soon start bouncing back. After all, it is Manchester United we are talking about. They will not finish 9th. If you are really willing to gamble, what about going for Hernandez (who looks like he should start with Rooney suspended and RVP questionable) or Valencia? They haven't done much this year, but this just might be what the doctor ordered.
Posted by Matej