How Do You Solve A Problem Like...Rotation?

Last Wednesday evening, as the Premier League team sheets began to roll in, the bottom fell out of many FPL managers worlds. One by one we looked on in bewilderment and started shaking our heads in disbelief as our "big" players went missing. Victims of the dreaded rotation policy employed by those clubs with the luxury of larger squads.

The worst culprit for this was Arsenal. In all honesty, Arsene Wenger has form for this, and none of us should have been surprised. But we were. In fact we were astounded. Not by WHO he dropped, but by who he brought in as a replacement. Giroud out - Bendtner in.

That's right, Nicklas Bendtner. The man "destined" to play for Barcelona or Real Madrid and hold aloft the World Cup for his native Denmark. Certainly if you believe him anyway. And I'm sure there are a couple of you that do believe this could one day happen (thanks for reading Mr and Mrs Bendtner).

Owned by 0.0% of FPL managers, this could have been the differential to end all differentials. Unfortunately I didn't see him picked by Matej for "Called It" or by Walt for his "Jack in the Box". Shame on you fellas...shame on you!

For those of you that have found a place for Theo Walcott in your team, I imagine you were FUMING! Here was YOUR differential. Admittedly, you were expecting him and Giroud to play. None of us predicted that Giroud would be rested, and if we did then surely it would have been Walcott up front, not Nicklas bloody Bendtner! 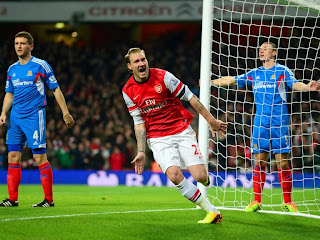 But Bendtner and Wenger had the last laugh. He scored in under 2 minutes (his first goal since March 2011), picked up a bonus point and ended the night with 7 points. To add insult to injury he was replaced by Walcott for the last 18 minutes who picked up 1 point. Great.

It didn't end there though. Wenger also rolled the rotation dice and brought in Nacho Monreal (Mmm...nachos...) for Kieran Gibbs and Tomas Rosicky for Jack Wilshire.

Moving on to Chelsea, the injury picked up by Oscar saw Mourinho's hand forced as he gave a second start in a row to Juan Mata. This is likely to continue for GW15 and 3.8% of you now own the little Spanish wizard. Still a hefty price tag, but an incredible differential if he recaptures the form of last season. 3 starts in a row and surely he is now starting to settle into life as a Chelsea regular again?

Ashley Cole is still being kept out by the form of Cesar Azpilicueta, but surely it is only a matter of time before Cole regains his place? A poor showing against Stoke in GW15 could see this happen sooner rather than later.

Next came the Southampton team sheet. No Jose Fonte! This affected 1 in 5 of us but it didn't look too bad as Saints poor defensive form continued at home to Aston Villa. But then Fonte came on for a cameo appearance. In the half hour he was on the pitch he conceded 2, picked up a yellow card and got himself an injury that will probably keep him out of GW15. Awesome.

Next the Manchester City team sheet came in. Still no Joe Hart. No real surprise there. But where was Alvaro Negredo?!? 3 goals in his last 4 prior to the start of play, but Dzeko is given his place in the team!

Who else got rotated then? Christian Benteke for Villa for one. Not as much of a surprise as Giroud as the big Belgian is suffering from a dramatic loss of form. If you still have him in your team then I would suggest this is a case of misguided loyalty as it seems it is unlikely he is going to be back in the points anytime soon. Every week you persist with him, you are probably falling further and further behind. For someone who hasn't scored since GW4 and who hasn't racked up more than 2 points in any GW since then, the fact he is owned by more than 1 in 10 of all managers is odd. If you absolutely, positively must have a big Belgian striker in your FPL team then surely it has to be Romelu Lukaku?

For many, before a ball was even kicked in GW14, their team was in disarray. I doubt any of us predicted that come 10pm many of us would be looking at our highest scoring gameweek of the season! As tales of 100+ points came rolling in via Twitter, it seemed unbelievable that this was happening in a non-double gameweek and especially as some of our players had been rotated with our (quite frankly) weak bench players coming in to play.

So step forward Luis Suarez, Eden Hazard, Yaya Toure, Frank Lampard and Mesut Ozil. For some of us you WERE GW14! And if you were one of the managers to have some of the lesser owned high scorers in your team then take a bow. Jonjo Shelvey, Fabian Delph, Bryan Oviedo, Gabby Agbonlahor, Raheem Sterling, Carl Jenkinson, Vlad Chiriches and Nathan Dyer all got into double figures. The Crystal Palace defence again did well as a unit.

Not only did Nicklas Bendtner score, but so did his old Arsenal partner in crime Marouane Chamakh! I suspect if Luis Suarez hadn't done his thing, some managers would have given up on this season!

Where do we go from here then? Silly season is once more upon us. Rotation will now become a feature as we move through December and into January. The fixture list is relentless. Big names WILL get rested. Is anybody safe? Certainly not Aguero (I predict GW15 could see him benched with a Champions League game midweek). Giroud proved he wasn't safe when he is effectively Arsenals only real quality forward. With Sturridge injured you may think Suarez is safe. Maybe not. Same for Rooney. Suspension aside, with the continued absence of RVP you may think he is untouchable. But Welbeck and Hernandez could easily take his spot.

So, how do you solve a problem like rotation? Think carefully, plan ahead, try and second guess the manager and above all - don't get too angry when your star players start to score 0 points in the next few gameweek! Don't be hasty and get rid of them, use your transfers wisely. NOW is the time to act to strengthen your bench and get low cost players who are guaranteed to play and may even sneak you a goal, an assist or a clean sheet.

But for the love of God, hurry up and put Nicklas Bendtner in your team...