I promise to be as short and sweet as I can, but we all know that that's an exercise in futility. So here's the lowdown....

Last Tuesday night, amidst the craziness of dotting my i's and crossing my t's at work, helping get the house clean, preparing my in-laws for 5 fun days with our kids, and packing, I threw together a quick GW32 #JITB article featuring Mr. Miguel Michu then, after a restful sleep, got on a plane to paradise.

As the friendly woman at the open-air front desk of the resort checked us in, a bartender appeared out of nowhere teasing us with "virgin" mojitos on a tray as a welcome treat. Without much prodding, he soon revealed the bottle of rum in the hand he had kept behind his back, and he proceeded to "top off" our drinks before having us open our mouths and tilt our heads back as he poured the rum straight into our mouths. So Welcome to Aruba - Manchebo style! 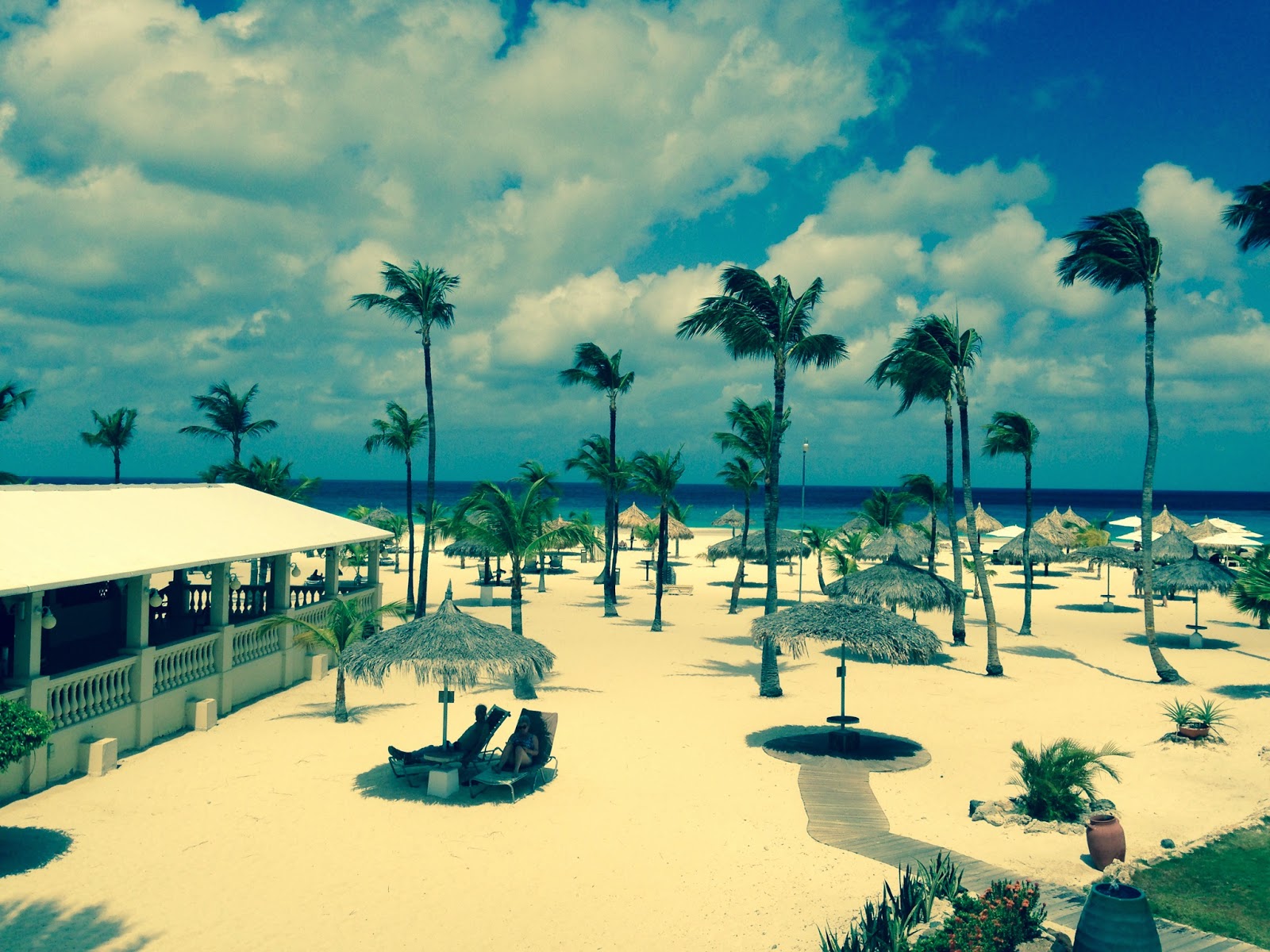 Unable to move fast enough and grinning from ear to ear, we quickly went up to our room, paused long enough to take the picture above from our second floor balcony, changed into our beachwear and high-tailed it back downstairs to take in the resort and start exploring. Sometime between then and the time we left, in a land far, far away, a guy named Michu was taking to the pitch. It could have been while we laid in a mild stupor on the most beautiful beach I've ever been to, sometimes in the shade of our thatched roof hut, or sometimes in the 88 degree Caribbean sun. It could have been while we sat back and read or while we closed our eyes and took one of a number of breeze-induced catnaps. 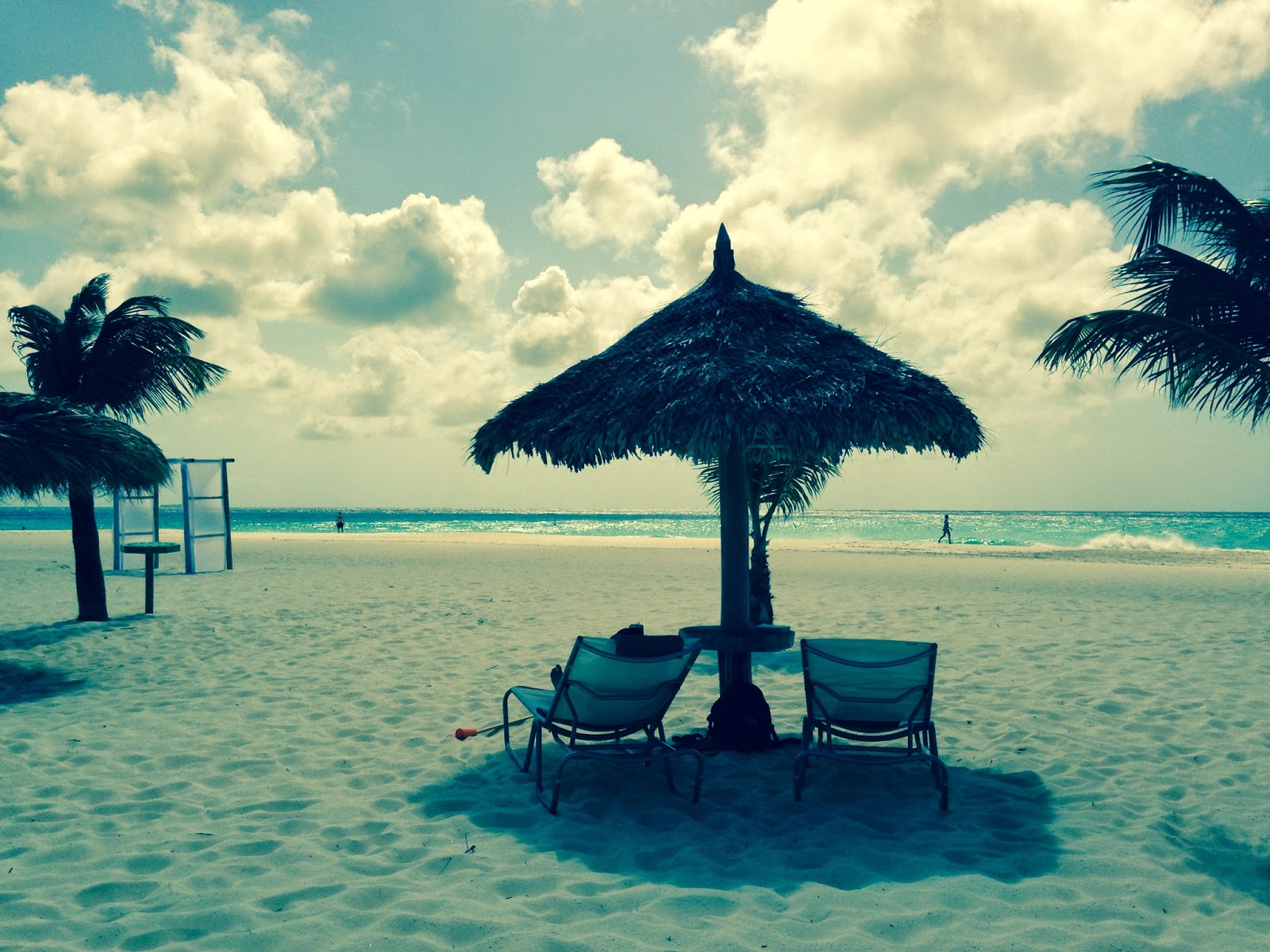 Maybe it was while we enjoyed a couples massage inside the top notch spa with sweeping views out to the ocean. Perhaps it was while we were being pampered up one side and down the other by a staff whose greatest enjoyment seemed to be making our own enjoyment as complete and effortless as possible. I don't know, it could have been while we sat at the beach bar during one of our all-inclusive days, making our way down the tropical drink list one by one seeing how long it would take before we got to one we didn't like. It surely wasn't late in the afternoon as the steel drums played, the myriad of birds chirped, the breeze made the overhead palm leaves sway in unison, and the giant Sun orb in the sky settled down into the ocean horizon.

Hah, I actually do know when it was now that I look back on it. It was around the time we walked through the beach bar on our way across the street to have lunch. I glanced at the bar tv, showing Crystal Palace with a 1-0 lead over my Chelsea Blues, felt a ping of astonishment, then (don't tell anyone) forgot about it as quickly as it took for my brain to figure out what it saw in the first place. So, sometime around then, while sipping on a Heineken, unbeknownst to me, Michu was out there making me proud with a 7-point haul. I didn't learn until I had arrived in Aruba that the FPLHints team ran the board with Michu picks. We were all happy; and that's nice ;)

Which brings us to this week. It's a veritable JackInTheBox-Fest, with 6 of the bottom 8 clubs and 8 of the bottom 9 clubs squaring off in a winner takes all gang-war. Well, not really, but you know what I mean. There hasn't been much shakeup in the bottom 8 recently, but that could change soon enough. It's gonna be interesting. Take a guess when the last time a team playing against West Brom scored zero goals. Go ahead; unless you're a Baggie you probably won't remember. Mid-March...nah.  Late February...try again. Okay fine...mid-January. WRONG. It was New Year's Day. They played Newcastle at home that day.  They won't be so lucky this time around as they will face Norwich away. And while Norwich have not been the most productive side at home recently, West Brom have conceded on average 2.5 goals during their last four trips away, including 2 to Hull, 3 to Crystal Palace, and 4 to Aston Villa. I'll take these odds and toss the armband to Mr. Snodgrass this week, thinking he should be heavily involved in the Canary attack.

And, if he doesn't come through, well, I always have my Aruba memories and pictures to fall back on to calm me down. Oooooh......so relaxing. Gimme a beer, Phoebus.

(I think the above picture may be the single best picture I've ever taken ;))