With only one week remaining until the Double GW of all Double GWs, it's time we set to look for that differential that you can carry into the highly anticipated GW31 and can make the most in the next three games.

I imagine that the majority of you reading this had one sure thing that you wanted to do for the GW31 – bring in Aguero! And rightly so. The man has been of fire this season, but his hamstring just doesn’t want to play along with us FPL managers. From an athlete standpoint, I really hope this is just a one week thing and he will be up and about in no time. But from a #FPL point of view this opens a bunch load of questions. Are MCI players still a MUST? Should we double or even triple on City assets? Can we trust them to do the job?

My humble opinion is – YES. It might be a slightly bigger unknown what they will do without Kun, but hey, they can still win the league and I, for one, can’t see them going down without a fight. And while the forwards situation is a bit unclear, there are some must-have assets in their midfield (and perhaps even defense).

Yaya Toure, the man I tagged long ago as “he can’t keep this up” has been mocking me ever since. On fire, consistent and with Aguero out, also on penalties. Do not look any further if you want a secure way into MCI midfield. Down to 9.9m, he is owned by over 40% of FPL managers though – so if you are like me (always on a hunt for a riskier differential), read on.

There are two intriguing options in midfield – Samir Nasri, who seems to be flying after coming back from injury and my old favorite, David Silva. While Nasri has more explosive potential and has basically been my pick the entire week, I back David Silva to do his magic. He is a slightly bigger risk with Aguero out (as they form a mean partnership), but this could be his time to shine. David Silva, 4,5% owned - #CalledIt for GW30.

P.S. Did you see Silva's setup for Nasri in the game against Barcelona? Poetry in motion, I tell you. 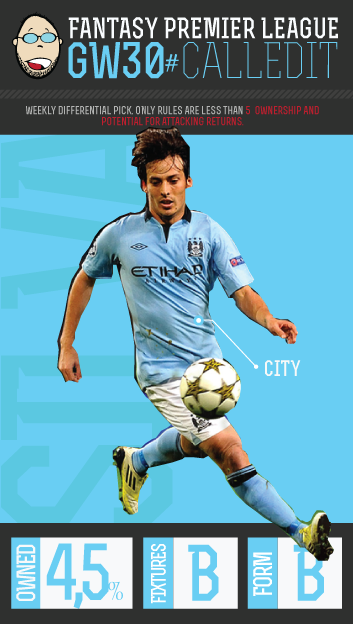