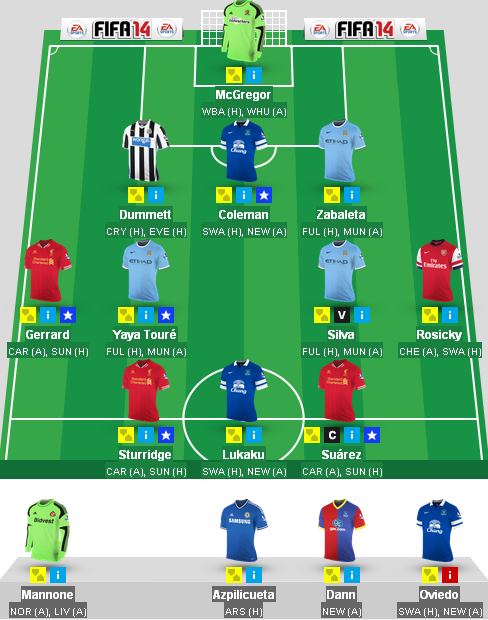 MARSHALL OUT
McGREGOR IN
Reason: Rotates fairly well with Mannone till the end of the season.

DISTIN OUT
COLEMAN IN
Reason: More expensive but has shown regular attacking prowess.

B. DAVIES OUT
DUMMETT IN
Reason: Value for money and has 2 home DGW fixtures.

HAZARD OUT
GERRARD IN
Reason: Shown fine form of late & is first choice on penalties.

LALLANA OUT
SILVA IN
Reason: Has been overshadowed by Y. Toure but is back to his best.

HOLTBY OUT
ROSICKY IN
Reason: Plays in the hole and will play due to AFC's depleted midfield.

RODRIGUEZ OUT
LUKAKU IN
Reason: Has been patchy of late but is due a run of goals.

WARD OUT
DANN IN
Reason: Cheaper than Ward and also has DGW34 coming up.

HOOLAHAN OUT
OVIEDO IN
Reason: Cheap makeweight player that has freed up funds.

Hi all!  I managed to bag 64 points in GW30, 10 of which came after Suarez (c) was credited with an assist and some baps after FPL's retrospective action.  Woohoo!  Enough of that, there's some other business to attend to...

The biggie is here - DOUBLEGAMEWEEK 31 + my all-season wildcard has finally been activated.  I tried buying players who have some form on side and are likely to play twice.  I also factored in DGWs 34 and 37.  My wildcard changes and their reasons are fairly straightforward (as detailed above).  I am feeling bullish and I think a score of 90 will be par for those with wildcards, whereas a score of 100 is an achievable target.

I have opted for Suarez as captain due to his fantastic short-term and long-term form.

On a side note, we qualified 2nd in the group stages of the FPL Dugout Champions League and are now through to the knockouts!