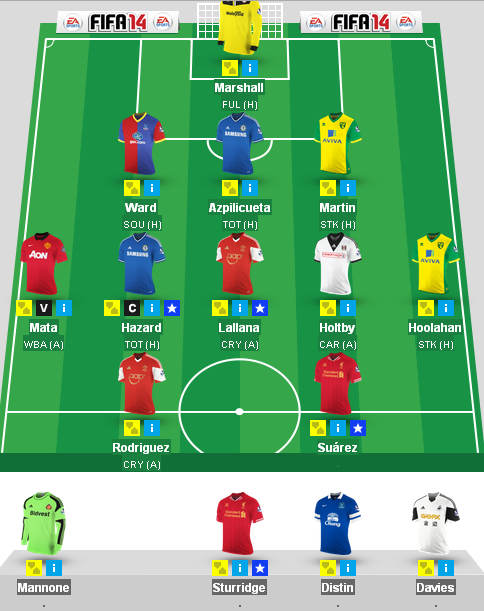 1 FREE TRANSFER WAS AVAILABLE FOR GW29.

NOLAN & COLLINS OUT
MARTIN & HOOLAHAN IN

It's finally here... GW29 - Truncated GW - One Day - Only 5 matches.  Bravo if you have 11 players at your disposal with no hits to boot.  The chances are that many of you will be left stranded with just over half a dozen players and the prospect of hits galore.  I didn't want to panic sell Suarez & Sturridge just for this GW and make losses on their values.  I wanted at least 10 players and couldn't sell Davies or Distin either due to good fixtures in GW30.  In the end I decided to sell Nolan & Collins with a 0.4 loss.  This doesn't sound too bad in the wider scheme of things as I wanted to increase player coverage.  Despite selling Nolan, I may re-buy him in DGW31 with my wildcard.

With my wildcard due to be activated soon, It was hard finding short-term replacements for 1-2 weeks.  Ince and Snoddy topped my shortlist again.  But with my slogan in mind I diverted my attention to the Irish Messi - Hoolahan.  He scored against Villa (despite not celebrating) and did fairly well on Wednesday (despite Ireland losing).  He has form on his side and has a point or two to prove.  Norwich have been half decent at home with an array of clean sheets in 2014.  They are facing a Stoke team that has one of the worst away records this season.  This factor, along with "Wessi's" cheap value and form made me favour him.  In addition to him, I bought his colleague Martin due to the Canaries home CS prowess.  Martin has a good goalscoring record and is surely due a goal for this season too?

I know Holtby was a fail last week and Hoolahan is risky this week too.  But having a combined ownership of sub 1% makes them Super Differentials and tantalising bargain buys.

Alas there were not many captain choices for this GW.  Hazard is the obvious choice and made sense (due to form, importance, prowess, etc.) which is why I have given him the armband.  Good luck and well done in advance if you manage to muster 40+ points!