Many FPL pundits have advised for entire week (or even longer) that you should not transfer in players who will not have a DGW in GW31. While I do see the logic behind it, I still disagree with it. Or, I agree only to a certain extent. Based on my last year's experience (you do still remember I finished 15th overall in the end? - unlike this year when I am hovering around 16,000th place at the moment) these are the exact weeks when it makes sense to find that one or two differentials to get that boost in your ranking. And I intend to do just that.

Do proceed with caution though - these are differentials we are talking about. As such, they are not GUARANTEED they will deliver. I will be taking them personally, because I don't really care if I finish at 15k or 60k. I want to get at least into single thousands and for this I need to (I want to :)) take some risks.

I went through a couple of scenarios for GW29 (much more than for any GW lately) and the differentials I have considered for my team were the likes of Brunt, Hoolahan (Chief's transfer), Anichebe (Walt's #JackInTheBox and Space Monkeys' #SpacePick), Ince and Zaha, just to name a few.

And while I have a good feeling about a couple of them, I will be putting my trust into Robert Snodgrass. He may have effectively blanked in previous GW (hauled off after 45 minutes with a yellow card to his name), I believe he should start (he was training today) and his stats have been impressive as of late. If I can find a way to fit him in my team, I will. Robert Snodgrass, #CalledIt for #GW29. 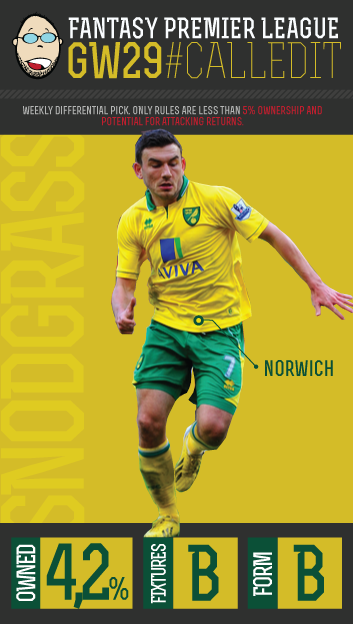