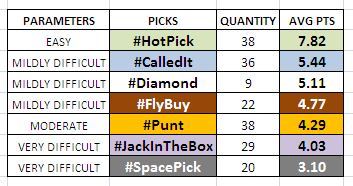 Technically we did the "Treble" if we include the Shield, but in an undisputed sense we did the "Double" courtesy of the Pundits League and Champions League successes.


Comeback of the Season

Quotes of the season:

"Oh, does anybody really give a rat's patootey about the bottom 8 at this stage of the game?"
- Walt on his last #JITB of the season.

"So I'm cured then! No longer prejudiced against any particular player or club (except West Brom!)"
-Fly on one of his many musings (Glad he finally bought Y. Toure!)

"The guys explain to me that it is illegal for 3 pm games to be televized in the UK. Say what? A joke? Apparently not".
-Matej, as the mirage of English football falls flat to the ground!

"Full-backs are the new centre-backs - watch them score more goals this season!"
-Dolphin and his out-of-the-box thinking.

"Take a look at that bantasy points tally and you'll need to take a cold shower and conjure a mental image of Susan Boyle in a two-piece before you can leave the house without walking like a pterodactyl to cover your shame".
-Bantasy Jake and his active imagination.

"It's not a bloody convention!"
-Fantasy Yirma on my insistence that the DGW31 meetup was in fact a convention (it was!).

I may have scored my highest GW score (173) and attained my highest ever FPL points score (2346), but I feel that I didn't fulfill my potential.  I only scored 80+ on two occasions and my inability to do so during any non-DGW contributed to my eventual rank.  Three things were problematic for me this season - not captaining the eventual highest points scorer in my team (semi-frequently), switching captains at the last minute (a handful of times) and making a few rash late panic transfers.  I was targeting a Top 10k finish and got awfully close to it up to GW35... but bottled it with incorrect captaincy picks, failed transfers and injures as a I plunged down 20,000 places in the space of the last 4 weeks.

Even before the season began I made few panic changes by selling Nolan, O'Brien and Southampton defensive coverage which lost me a few early points.  I shudder when I recall that I had Downing, J. Morrison and Snodgrass in my squad... who were total fails.  I started the season in medicore fashion and only moved from 227k to 117k in the first half of the season.  Having said that, I was fortunate in buying Suarez, Ramsey, Y. Toure and Ozil relatively quickly, before they became bandwagon players but was reluctant to captain them early on which didn't help me.  Also, I sold Toure as I thought his fine form couldn't continue! But I did re-buy him again.  As the new year chimed and the ghost ship FPL accounts sailed away, my team gradually rose up the table.

I took an eye-watering 72 points worth of hits. (the highest ever for my Blog Team)  Sometimes they paid off, sometimes they didn't.  Interestingly I only took one -4 hit between GWs 25-35.  During this period I had risen up the rankings from 76k to 15k.  Food for thought perhaps?  My GW teams were atypical of past seasons' teams, 3-4-3/3-5-2 (cheap goalies and defenders) with robust midfielders and solid strikers.  Having said that, I could have done with the likes of Skrtel and Baines in my team but they were over-priced (and will be more so next season).  In terms of my wildcards, I didn't panic and I believe that I used them at the right time.  The time of their usage kept me in good stead and if anything were damage limitation for me.  Had I panicked and used my all-season wild card early, I wouldn't have score 173pts in DGW31.

As the season progressed, I shifted my Arsenal core team (Gibbs/Koscielny-Rambo-Ozil) as their wheels fell off and emphasised on Liverpool ("SAS" combo).  I joined the Gerrard-bandwagon late on, but still managed to reap some rewards from it.  This was complemented with my City core of Zabaleta-Silva-Toure (later becoming Zabaleta-Toure-Aguero).  I shouldn't have been so patient with Lukaku and to my dismay Barkley seemed to fail when I had him and did well when I sold him/didn't have him!

Despite having a sub-par season, I sensationally won the much coveted @FPLDugout Champions League.  I got lucky along the way as I won some H2H ties by a few points and my opponents sometimes benched the "wrong" players.  Winning it means a lot to me, as you get some great banter with the participants and I won their regular league to boot back in 2012. To date, I am the only person that has won those two prestigious @FPLDugout accolades and I did so in the space of three seasons.

I would like to finish off by thanking all of my writers (and pick makers) that contributed so fantastically over the last 38 Gameweeks.  They are a great bunch of lads who took time out of their lives to make your lives that bit easier.  Just think about that for a moment.  Also a special thanks to all of our partners and their superb support.

As you all know by now, I will be taking a backseat from punditry as of the 2014/2015 season.  There will be no more weekly hints from me.  I will only be offering a skeleton service - perhaps posting up my private team every week or two.  Fear not, I should have writers at hand to provide their own hints which will hopefully meet your fantasy needs.  I am semi-retiring as a pundit knowing that my Blog Team never finished a season outside the Top 1.1% for 3 years in a row.  Considering that I am only an amateur that means a lot.  With my "one foot in, one foot out" status, I leave you with this confusing song: