Prelude: Quick Lookback at the Football Blogging Awards
Well it's 10:30 p.m. here in the U.S. and I can't start writing about this week's #JackInTheBox without first mentioning the excitement that was going on in Manchester earlier this evening.  The 2013 Football Blogging Awards, after much anticipation, kicked off at the National Football Museum, and our very own Chief was on hand to experience first hand the glitz, glamour and honour of being one among an extremely talented group of finalists in the Best FPL Blog category.  Although the trophy did not make its way back to the Fantasy Premier League Hints headquarters, the pride and honour of being recognized by football fans and supporters as one of the top 5 FPL blogs was felt all the way here in the U.S.A. and Matej and I couldn't be more proud of what the Chief has created, built and sustained here.  To be among the recognized powerhouses of the FPL community is nothing short of a true honour, and we congratulate a very deserving winner in @FFPundits and the excellent blog Leon and his team have created.  Meeting Leon and the @FantasyYirma team (Ryan and Mark) was also a highlight of the evening, and I know that like me, you all look forward to hearing stories from the Chief about the epic evening.  Congratulations Chief on a job extremely well done and a recognition thoroughly deserved! 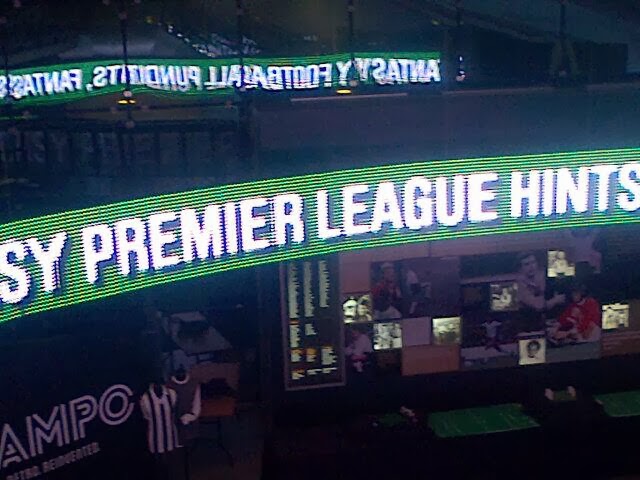 Okay, on to the #JackInTheBox.  It seems like forever ago and is almost forgotten already, but last gameweek's JackInTheBox, although playing a pivotal role in the home side's victory, did not get on the scoresheet or rake in any bonus points.  I was proud of how Howson played though and despite the disappointment that the bullet he rocketed off the post in the 71st minute didn't dip more quickly, was happy with how he played and felt good about my pick.
This week I face a similarly tough challenge.  The Bottom 5 line up as follows:
20)  Crystal Palace away to Hull City (12th)
19)  Sunderland away to Stoke City (17th)
18)  Fulham home to Swansea City (13th)
17)  Stoke City home to Sunderland (19th)
16)  West Ham home to Chelsea (4th)
Although ifs and buts don't count, I came awful close last week to choosing Jonathan Walters as my #JackInTheBox, and given their home fixture against a struggling (but showing signs of resurgency) Sunderland squad, I am going with Stoke.  Like the first week of my #JackInTheBox series, I have been very tempted to go with a defender (the likes of Huth and Wilson and Pieters have all caught my eye).  Interestingly enough, only Begovic and Shawcross are disqualified via their high relative ownership numbers.  Every other Stoke player is a viable candidate.
GW12 FPL #JackInTheBox:  Peter Crouch 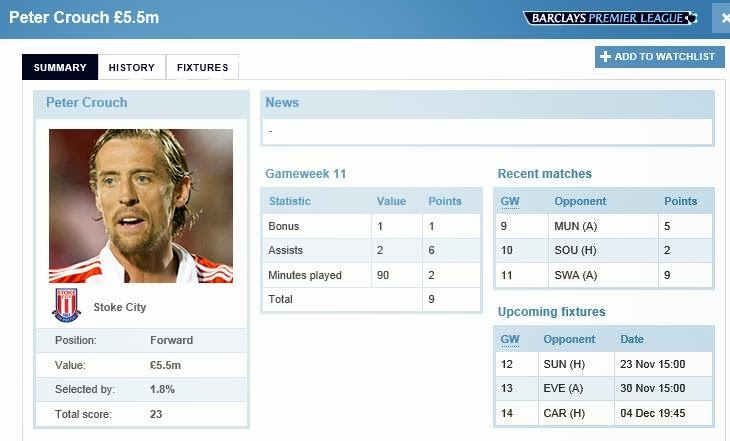 Well, perhaps I'm letting my memories of the past get the better of me, but I can't scan the Stoke City lineup without immediately having flashbacks to perhaps the best goal I've ever witnessed on live television.  Maybe you recall what I'm talking about.  It was Stoke vs. Manchester City, March 24, 2012.  Asmir Begovic launched a ball during open play from just inside his 18-yard box.  Peter Crouch headed it wide to his right, where Jermaine Pennant headed it back to Crouch, who teed it up with the inside of his right foot before slamming a 25 yard volley across the penalty box to the top opposite corner, just beyond the fully outstretched arms of a completely surprised Joe Hart.  I remember watching it live and shaking my head, thinking "Holy crap; did that go in?!?!".  Well yes, it did; and the ball did not leave the ground from the time it left Begovic's foot to the time it folded the back of the Man City net.  Incredible.  And I'm taking a punt on Crouchy to put up some more magic at home against the Black Cats.
It will be a tough match and one of those potential 6-pointers you love in a relegation battle (although yes, a little early to be talking in those terms).  In the last 3 gameweeks Sunderland have won the Tyne-Wear derby and have beaten Manchester City on either side of a disappointing loss to Hull City, while Stoke have played Man United tough in a 3-2 loss before drawing to Southampton and Swansea.  With the likes of Altidore, Fletcher, and Giaccherini applying pressure, going with a Stoke defender is way too risky.  I do see Stoke getting a hard earned result here, and am hoping that Crouch, eager to impress the home crowd, could provide another moment of brilliance and be the difference in a tightly contested 1-0 victory.  Or so I'm hoping.
﻿
And if he doesn't, well, I'll probably do something that looks a little bit like this:
Welcome back FPL and welcome back the banter.  It's been a nice little break, but we've also all missed it and are itching to get back into the swing of things.  Have a great weekend everyone and make sure Fantasy Premier League Hints is in your favorites list if it isn't already.
Cheers!
Walt
﻿
Posted by EPLFanForLife