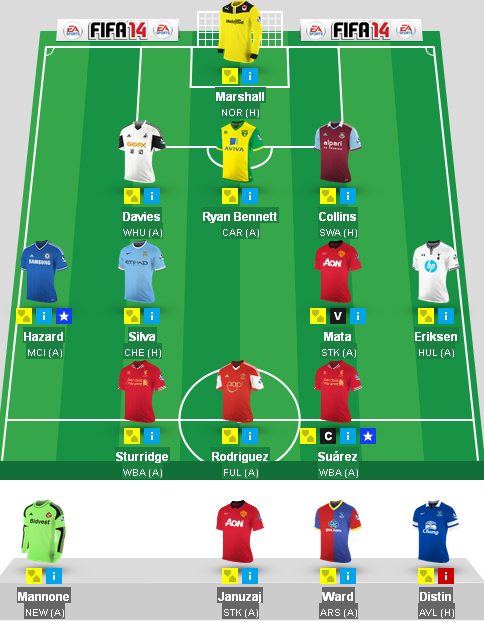 Aguero & Berahino OUT
Sturridge & Rodriguez IN

Hi folks!  Apologies for posting my GW posts later than usual.  I wanted to wait until hearing definitive news on Aguero's injury and that only came in this afternoon (at least 4 weeks out injured).  As a result, I decided to sell him.  This proved to be a difficult task as I had only used my wildcard the GW before.  I went one step further and took a -4 hit to bolster my striking options.  I considered Dzeko, Negredo, Van Persie, Rooney, Adebayor and various others.  In the end the following things swayed me:

The criteria above led me to buy Sturridge and Rodriguez.  I know it's a risk doubling up on 2 strikers from the same team in Suarez & Sturridge.  But the "SAS" partnership has been amazing thus far and I can't help but think that either they will both do well or at the very least one of them will per game.  As for Rodriguez, he has been a bit of a dark horse this season.  Both Sturridge and Rodriguez will be looking to make England's World Cup team in Brazil.  What better way to do that by playing well from now until May?  In #FPL terms they are both value for money, scoring 22 goals between them (a combined goals:minutes average of 1 per every 133 minutes).  West Brom at home will be a tough team to beat, but Liverpool will be an even tougher team to prevent scoring! With this in mind, I could have captain Suarez or Sturridge, but have opted to give the armband to the Uruguayan.  Looking at my team, I actually like how it looks now than to 48 hours ago due to the balanced attacking options.  Let's hope it works out!
Posted by fplhints