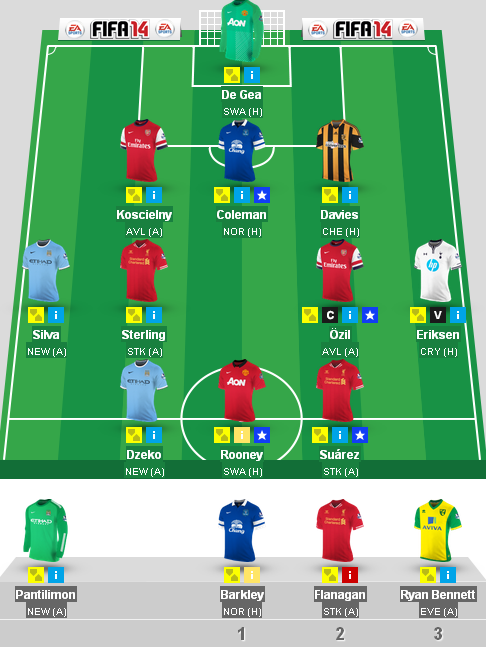 Walcott OUT
Ozil IN

Belated Happy New Year! It's January and that can only mean one thing in the world of #FPL...

Please note; you can activate your wildcard anytime during January, but wildcard changes must be confirmed before February 1st 11.30am GMT.  Despite my team being in need of a shake up, I don't intend to activate my January wildcard until the end of Gameweek 22.  The Walcott injury was a major blow for my team.  He was a good end of December signing for Gameweek 19 and solid captain for Gameweek 20.  His injury will force Wenger into the transfer market and will cause many FPL managers to reshuffle their teams.  Had he not been injured, I would have sold R. Bennett or Flanagan as my defence could do with a pre-wildcard boost.  I didn't think it was worth taking a -4 hit for a defender.  I will ditch Dzeko just before Aguero returns to the team, but he seems viable for now.  I was tempted to replace Walcott with "Captain America" - Clint Dempsey.  But I want him to rediscover some of his old form first.  Arsenal coverage made sense, which is why I decided to repurchase Ozil.  He seemed a bit knackered before his injury at the end of December.  He was due a rest, so the short-term injury may have come as a much needed break.

Not only have I decided to re-buy Ozil, he is also my captain for Gameweek 21.  As you all know by now, I enjoy picking Monday night football captains when given the chance.  For the time being, I believe Ozil will become Arsenal's most important attack orientated player with Giroud being knackered and Ramsey, Walcott and Bendtner being absent. Ozil takes free kicks, assists often (home & away) and also scores goals from time-to-time. Such pedigree and prowess makes him the ideal transfer and captain for Gameweek 21.  I could have captained Eriksen but he needs to show me some consistent form first.  Rooney seemed viable, albeit a fitness doubt.  Dzeko is a risk whereas Suarez could be blocked out by a "work-in-progress" Stoke side.  Ozil as captain has a risk v reward element to him which I like.  Most importantly, Arsenal will be looking to maintain top spot and gain revenge against Villa after their shock opening defeat of the season.  Game on!