Many factors can be credited to Newcastle United's renaissance start to the 2011/2012 Premier League.  But one element stands out the most - the influx of French speaking players over the past two seasons that has transformed the type of football played at the club.  The footballers in question are:

Demba Ba - Hot shot striker that has made the Toon forget about Andy Carroll.

Yohan Cabaye - Classy central midfielder. Won the league with Lille and could fit in any top team.

Cheik Tiote - Has been a defensive midfield rock in the team since last year.

Gabriel Obertan - ex-Manchester United misfit/winger that has provided class on the flanks.

Hatem Ben Arfa - recovering from a long-term injury lay-off and will prove key in the future.

Mehdi Abeid - Rising youngster that is currently playing a starring role in the reserves.


Even Match of the Day highlighted the visible French impact with the following graphic: 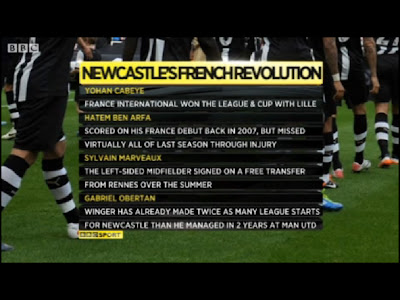 Admittedly not all of the French speaking players have made a huge impact thus far this season.  But the fact that a strong Francophone contingent prevails in the North East, complimented by the early season success of the Geordies is no coincidence.  Without a doubt, Ba, Cabaye and Titote have been very influential.  Ben Arfa has the potential to supplement the successes of the team along with Abeid and the two wingers.  Ultimately it is the change in mindset and football culture that has instantaneously transformed the club from the loutish/undisciplined days of Nolan, Carroll & Barton, as is evident with Yohan Cabaye's views.  The question is can the French Revolution continue?  Will it inspire the non-French speakers in the team?  But most importantly, will it just be a one-off for this season or provide a lasting legacy that can land Newcastle United major silverware in the not-to-distant future?
Posted by fplhints