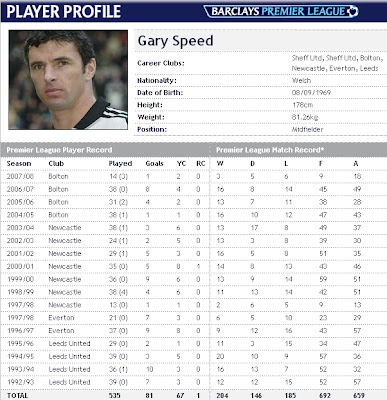 Player Profile Source: PremierLeague.com
It may come as a shock to you, but Gary Speed has died at the age of 42. He was the manager of Wales and had dramatically changed their on-pitch form of late for the better. He leaves behind a national team with young star potential - who knows to what heights he could have taken them. In his playing days he operated as an effective central midfielder that could score and create crucial goals.  To state the obvious - he would have slotted into any Fantasy Premier League team of the past two decades.  During his international playing career his contemporaries included fellow legends such as Mark Hughes, Ian Rush and Ryan Giggs.  He represented his country on 85 occasions. I personally remember Gary Speed from his playing days as an important club player at Newcastle United, where he helped us reach the 1998 and 1999 FA Cup finals, as well as getting us into the Champions League. The evergreen midfielder had won a league title earlier in his career with Leeds United and was remarkably playing a high quality of football into his late 30s.  At one point he even held the record for most Premier League appearances.  We will never know how successful a manager he could have been. Gary Speed - A manager and man of so much talent that died so young. My sympathies go to his family and to the people of Wales.
Gary Speed: 1969-2011
Posted by fplhints