Transfers: Sessegnon (OUT) / Walcott (IN) 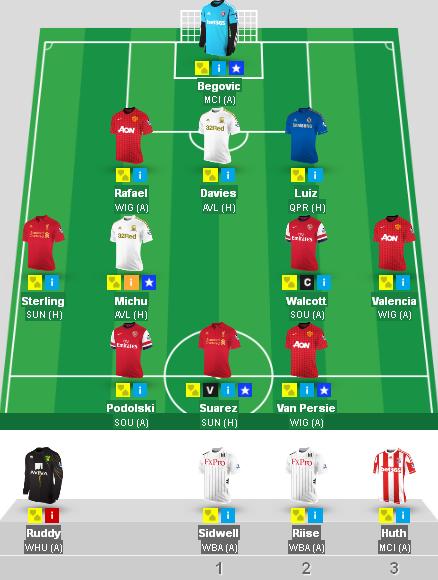 Sometimes you have to go with your gut instinct even if it means a -4 hit.  Alas I didn't do that last GW and lost out on 26 points, as well as my place in the FPL Cup!  You guessed it, I wanted Theo Walcott but stalled at the last hour.  I even recommended him as one of my ideal XI hot picks for GW 20.  I suppose at least that purchasing Podolski for Tevez was a minor masterstroke and gained me a further 11 points.

The problem was that I wanted to give Valencia one final chance (and he just about delivered).  Another option was to get rid of Michu but I didn't want to panic sell a top goalscorer due to his short-term injury.  The final choice was to sell Sessegnon, despite his quasi-return to form.

For this GW I have gone with the obvious and brought in Theo Walcott.  I had in fact bought him in November before he was struck down with injury and had Reading not had a DGW I wouldn't have sold him for the ill-fated Robson-Kanu.  Ironically, Theo has an upcoming DGW and I thought it best to plan ahead and bring him in now, especially with Southampton (A) being his next fixture.

I was looking at a -4 hit for GW21 and many options stood out; Marveaux (4.2), Gibbs (5.5), Evans (5.8), Azpilicueta (5.6) to name but a few.  Knowing my luck they will probably score goals and keep clean sheets between them in GW 21.  In the end I decided to hold my horses and not make any other rash changes as my team looks relatively strong.

My captain for GW21 is Theo Walcott, which was a no-brainer.  I doubt he will be rested v Southampton as Arsenal didn't play on Boxing Day.  On a more positive note, as I won FPL Dugout's league last season I gained automatic entry into their Champions League for this season and I look forward to dominating it!

Scored a colossal 40 points in his last 3 PL matches!
Listed as a midfielder but now playing as a striker.
At sub £9.0M, he is value for money.