Transfers: Robson-Kanu (OUT) / Sidwell (IN) 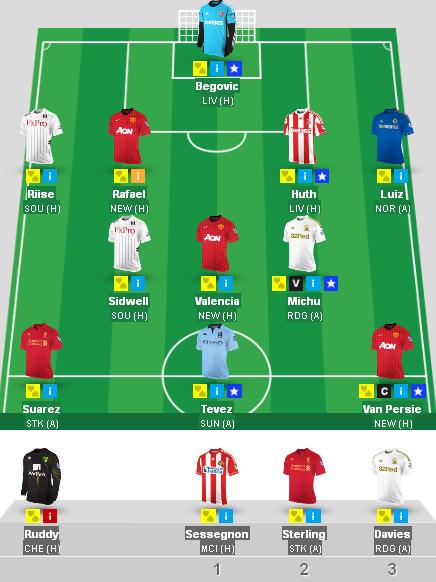 Looks like my team changes from last week were half successful.  Bringing in Luiz and recommending him worked out a treat.  However my purchase of Tevez (c) didn't come good against a dire Reading team, where as the player I sold (Fletcher) did in fact score.  Despite my captain only bagging 2 points, I scored 65 points overall and can't complain with the much needed bounce back.

For the boxing day fixtures (GW19), I realise that some regular first team players across the board will be rested.  Naturally this means that my bench could come into play and I am confident that I have reasonable subs at hand.  Moreover I am lucky that I have no Arsenal or West Ham players as their fixture has been postponed.

I decided to buy Sidwell due to a number of reasons.  Firstly, he is a key member of Fulham's first team.  Despite only being a central midfielder he has scored a credible amount of goals in the league so far this season (4).  I am confident he will start in Fulham's next two matches, which are reasonable:

Sidwell tends to do well at home against non-elite clubs.  In fact all 4 of his goals were scored at home.  This is good as I can easily alternate him with confidence when he has an away fixture.  In addition his bonus points accumulation this season has been impressive - 10 bonus points, 11th best for a midfielder.  A better record than the likes of Arteta, Hazard and Silva!

All the above is amazing when you see that he is only priced at £5.1M.  I have never been a fan of his, but I now see a pattern with him and I like it.  He won't score week in week out, but he is the perfect pick for certain home matches, as is the case now!

As for my captain I have opted for Van Persie, even though I fear that he could be rested.  In which case Michu should kick in for me against Reading.

Likely to start upcoming matches, unlike some other players.
Less than 3% ownership makes him a differential.
At £5.1M, he is definitely a steal purchase!