Disclaimer: *FPLH reserves the right to change this team at any time. Any changes made will
most likely be confirmed on FPLH's Twitter account. 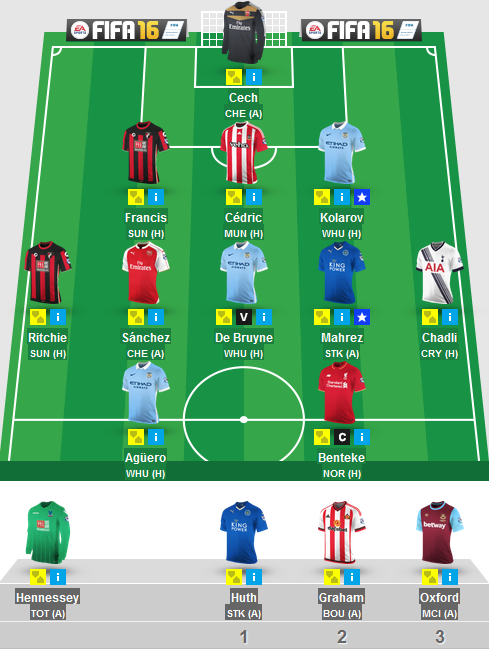 You would have thought I won the Rugby World Cup when Wes "Wessi" Hoolahan bagged an assist and goal during the previous Saturday afternoon.  His herculean efforts, along with a flurry of clean sheets catapulted my team up the rankings from 2.1 million to 1.2 million in the space of 2 hours.  Alas, those heady heights weren't to last as Mahrez's two assists and Payet's two goals knocked me down a few hundred thousand places, but I bagged a green arrow nonetheless.  Granted, the captain fail of Sanchez didn't help.  However, Kolarov's 9 clean points was a mega boost to my team.

Looking to Gameweek 6 I decided to take another -4, albeit controversial, hit. I decided to sell Hoolahan, as I believe he will be unable to deliver consistent fantasy returns, in part due to harder upcoming games and as he often plays less than 90 minutes.  His effectiveness in the long-term is questionable. I replaced him with Mahrez, as he is the most owned player and has scored the most points.  He has scored double digit FPL points in every game except for one, which is impressive. I simply couldn't ignore him anymore.  In truth, he was a counterweight for a differential signing - de Bruyne.  I'm amazed that the Belgian is owned by less than 2%. I know he hasn't started a match for City as of yet, but I'm confident he will after his first impressive appearance where his BPS was higher than almost all of the attacking players.

I decided to captain Benteke due to his recent form and also as a result of Liverpool's Suarez's fantastic goal scoring record v Norwich.  Aguero is also a good shout, but I'm not keen on giving him the armband due to his recent injury.  Chadli as captain was also an obscure option, as was the in-form Mahrez.  Other than that, if you can vote for us (see below) that would be greatly appreciated.  Have a good Gameweek 6!

You can vote for FPLHints as the "Best Football Influencer",
by going to The FBAs website.

Or you can vote via Twitter by by clicking here and tweeting this.