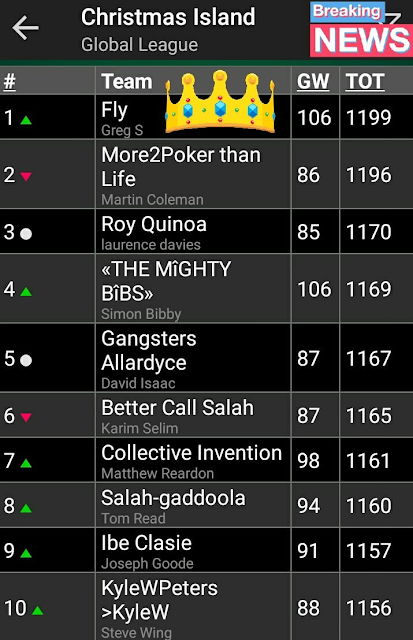 @FPL_Fly is a seasoned FPL manager.  His highest finish to date in FPL is 676th overall.  He also happens to be a former writer for FPLHINTS and one of the most interesting characters that I have met in real life.  But none of that is important now - he's surpassed it all by being crowned the Christmas Number One!*  I caught up with him on his achievement and FPL exploits.
*On Christmas Island

Chief - First and foremost, congratulations!  How does it feel to be the 'Christmas Number One'?

Fly - This ranks right up there with some of the greatest achievements in my life to date. It is hard to grade them, so in no particular order they are:

• Appearing on Tiswas as a 5 year old and having Sally James wipe Chris Tarrant’s custard off my face...

• Finishing 9th in the Men’s 100m Final at the London 2012 Olympics. I didn’t actually enter, but as there were 8 finalists it could be argued that I did in fact finish only one place below them...

• Killing Ayrton Senna. This is true, and one day the truth will come out.
Chief - What was it that convinced you to switch your allegiance from England to Christmas Island during pre-season?

Fly - Truth be told I didn’t actually vote for Christmas Island in the competition you ran to decide who we would “adopt”. One of the other finalists was a remote island I once lived and worked on and for which I have a special affinity. That said, once the decision was made, I was wholly behind the endeavour.

Also, I remembered how much Mrs Fly is petrified of crabs so I figured if there *was* the chance of an all expenses paid trip to Christmas Island for the winner (come on @CITourism, make it happen!) then I knew she wouldn’t come with me which made it an altogether more enticing competition!

Chief - What in particular have you enjoyed about being associated with the Christmas Island league?

Fly - I’ve actually learned a little about the place (other than it just all being about the crabs) and would love to one day visit Flying Fish Cove, which is also known as Kampong Settlement. Also, the shape of the island itself looks very much like a Poodle... 🐩

Chief - I know that Mrs Fly is also an accomplished FPL manager in her own right.  Has she been praising your superlatives this season and taking tips from you?

Fly - Seriously? It’s like trying to get blood from a stone to even try and get the information about who she is captaining for my regular pre-Gameweek tweet! She’s more secretive than MI6 when it comes to her FPL team. I’m happy to report, however, that she’s doing RUBBISH this season and is currently languishing around the 1.5m mark after keeping faith with Sanchez for far too long. She never listens to advice from me, whether in FPL or in real life...

Chief - I know you're having a tremendous season to date.  Let's not beat around the bush, you can realistically win FPL! What's your secret and what are your expectations?

Fly - No secret. I got off to an excellent start courtesy of 101pts in Gameweek  1 to make the Top 5k. Those first 2 weeks of the season were a great platform thanks to Hegazi, Mkhitaryan, Eriksen and Rooney. I did slip in Gameweek 3 and 4 to a season low of 173k but I’ve consistently been in and around the Top 5k since Gameweek 7.

That, combined with some decent captain picks has been the key which has allowed me to rack up a 63pt per Gameweek average. I’ve also kept faith with players with good underlying stats while others around me have rage transferred them out. But in all honesty, I’ve just been lucky.

Fly - It’s incredibly unlikely for various reasons. The main one is actually quite peculiar. Geographic location. The 2014 Overall Champion (@tomfenley) and the 2016 Overall Champion (@DimitriN23) live about 20 miles apart. I live slap bang between the two. In a global game of 5.5m+ players, 3 Champions from within the same small area in the UK would be a miracle!

I also think I may have peaked too soon; I prefer a much slower and steadier climb to tell the truth. The pressure at the top is massive. I know this from experience in 2010 when I went into the final week of the season inside the Top 50 (with a very realistic chance of winning) only to finish 676th.

Chief - Finally, I know you've had a challenging year to say the least.  What one piece of advice would you give to those that are having a difficult time in their FPL and non-FPL lives?

Fly - Yeah, it’s not been a great year outside of FPL. Having been diagnosed with Testicular Cancer in March my life got flipped, turned upside down - unfortunately there was no mansion in Bel Air at the end, just the removal of one of my precious spuds!

In all seriousness, I got lucky. It was such a rare tumour I didn’t need chemotherapy (as it wouldn’t respond to it) so I didn’t have to put my body through that.
What I would do is implore ALL readers, both male AND female to regularly check themselves and go to the GP is they detect anything unusual. There is absolutely NOTHING to be embarrassed/worried about!!

On top of that I then managed to secure a job that satisfied a long-held ambition, namely to work in Antarctica, only to bust my ankle and leg up badly 12 days into the 6 month contract. This has left me with a permanent disability and coupled with the cancer has left my head in a very bad place. With no real family support and friends not really being of the “type” to want to discuss these kind of things, I found solace in strangers on the internet.

The FPL community have done wonders in ways I’ll never be able to truly communicate. They’ve allowed me a safe place to whinge, bitch, vent, laugh and cry. But anyway, enough about Jurgen Klopp’s (mis)management of Liverpool!

I guess what I’m trying to say is whether you’re having a tough time in either real life or in FPL, find someone or somewhere you can talk. Don’t bottle it up. It’s not healthy.

I just want to end this interview by name checking the three other Christmas Island managers who could quite easily have been talking to you instead of me: @barCOLEYna, who led for so long, @CareemSelim and @davidoff_7.

I’m sure the lead of this league will swap many times between now and the end of the season.

Chief - It's been a pleasure speaking to you, buddy. Here's to a healthier and happier 2018 for you, and everyone! 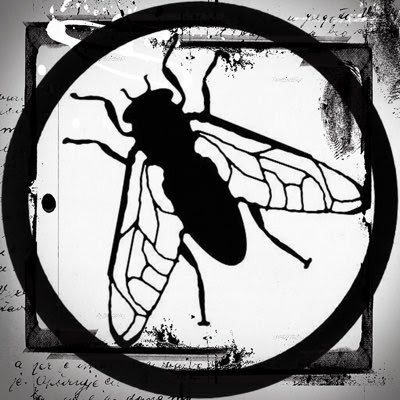