More than just a makeover... 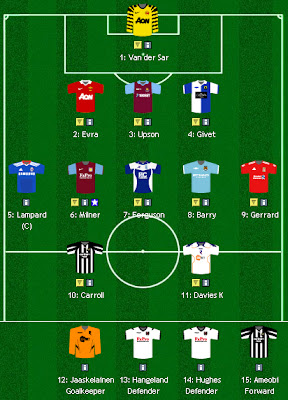 My team for gameweek 2 during the 2010/2011 season.
60 points scored, with 12 points lost on the bench.
I know it's gameweek 10, but there are some changes that have occurred to the game from last year that you may not be aware of.  I think its important for me to highlight the aforementioned to prevent you from being unwittingly short changed.  Apart from the obvious aesthetic interface makeover, Fantasy Premier League has changed in three major ways:
1) Overall Points deduction via extra transfers (not just Head-to-Head Leagues)
Last year if you made more than one transfer per gameweek, points would be automatically deducted from your head-to-head tallies, but not from your overall leagues or classic league points. This year, you will now also lose points from your overall leagues and classic league tallies.  It means that you need to be wiser with your transfer spending as you will lose out on an overall ranking basis with bad team selections.  Read my Management Advice page for more information.
2) Wildcard
A wildcard allows you to change your entire selected team for any gameweek without having any points deducted from your overall, classic and head-to-head league tallies. Last year the FPL game issued each team with two wild cards - to be used at any time. This year there are two wild cards, of which only one can be used between gameweeks 20 and gameweeks 23 with the other any time before or after.  My advice would be to avoid using your wildcard unless you absolutely have to, i.e. perennial bad injuries, long-term suspensions or poor form for a significant number of your team's players.  If you are going to use it voluntarily, try doing so after the January transfer window and/or near the end of the season, in case teams have bought new signings and they do well later on.
3) Bonus points update

Previously, bonus points per match would be updated within a few hours of match's completion, i.e. For a match that finished at 5pm, bonus points would usually be added by 9pm on that day.  Unfortunately it now takes a lot longer.  In fact you have to wait until the end of the weekend, i.e. all matches completed by Sunday would mean that bonus points will be updated by about 9ish on Monday morning.  This can be frustrating as you won't know your actual points or league rankings until a lot later, rather than on the day.  To complain about this or any new changes or faults, feel free to contact Fantasy Premier League on the following email address: