Following the unprecedented success of last summer's competition and the subsequent rapport with Christmas Island, which led to us being referenced in a book published by Penguin, I'm pleased to confirm a new series.  This edition will involve a slight twist.  But before I get into that, I have pledged my allegiance as an honorary citizen of Christmas Island for another season.  Please join their country league on FPL (instructions here).  Help us to exceed their real life population!

Having watched the best World Cup in living memory over the summer with a rejuvenated England team, something struck a chord.  A considerable number of England's players had an alternative career journey to a lot of their predecessors.  They didn't all come through the youth academies of top tier clubs.  Some even went out on loans to lower divisions to attain relevant experience that led them to where they are today.  In addition, the importance of non-league football in part also proved to be essential.  This shows the importance of grassroots football and the need for it to have even more support.

With the above in mind, I would like to become a 'fan' of a team in a low-level division, be it league or non-league, through out the 2018/19 season.  I wanted to shortlist quirky towns or cool sounding names, interesting back stories, randomness, as well as gauging suggestions from my followers.  For this to work, the clubs must also have Twitter handles.

Here is the competition format:

Here are the 16 shortlisted candidates in no particular order:

Confirmed groups as decided through a random draw generator: 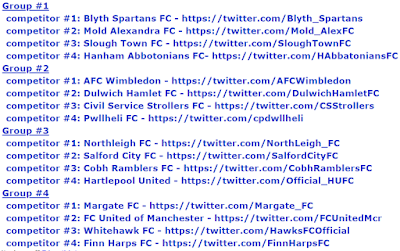 After 8 days of back-to-back action, the final arrived and it threw up a massive surprise.  Finn Harps FC and North Leigh FC fought off heavyweight opposition to reach the ultimate Twitter face-off which was packed with drama till the last minute. Polling remained at 50-50 through out the final hour.  Despite a mass influx of votes from both sides they couldn't be split (even with an odd number of votes).  Twitter doesn't give a break down of how many votes each poll option has won and I had no tie breaker! Therefore, I did the most viable thing and adopt both as my football clubs until next summer.

I encourage you all to support Finn Harps FC and North Leigh FC! Start off by following them on Twitter: