Disclaimer: *I reserve the right to change this team at any time. Any changes will most likely be confirmed on FPLH's Twitter account. 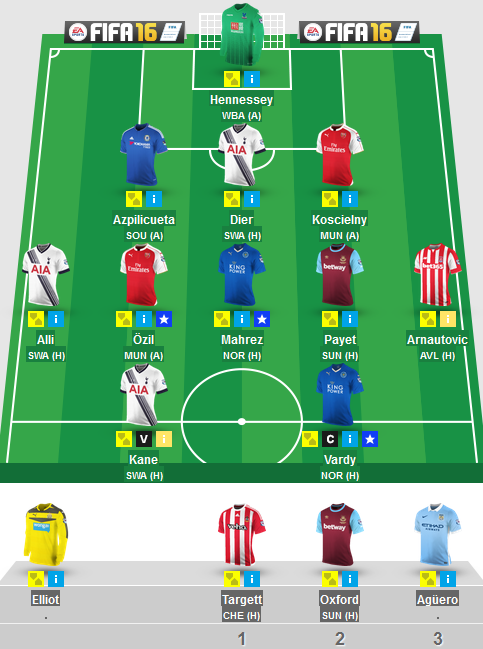 ALLI IN / BARKLEY OUT


I hope you all had a pleasant break from FPL and watched loads of cup football.  Now that is over for the time being, let's turn to this weekend's Premier League action with the first truncated Gameweek of the season as a result of the league cup final.

Put simply, I was tempted to sell Barkley and once it was confirmed that he wouldn't play in Gameweek 27 or 30, it made sense to buy a replacement who would.  This led me to in-form Tottenham and their OKish run of games.  I have been mulling over two options as my potential transfer - Alli and Eriksen.

Despite being 50-50 on paper, for the most part I really wanted to buy Eriksen but ultimately chose Alli as I knew I wanted a Leiceser defender in the weeks ahead.  I wouldn't be able to acquire one unless I took a hit had I bought Eriksen.  In addition, Alli's high ownership means that I had to buy him even if it was for the sake of "blocking tactics".  It also means that I have effectively got a "templified" midfield.

If only I had listened to myself sooner:

Other than that, I chose Vardy as my captain due to Norwich's awful away record.  I was also tempted by Kane but Swansea can be tough on the road.