Disclaimer: *FPLH reserves the right to change this team at any time. Any changes made will  most likely be confirmed on FPLH's Twitter account. 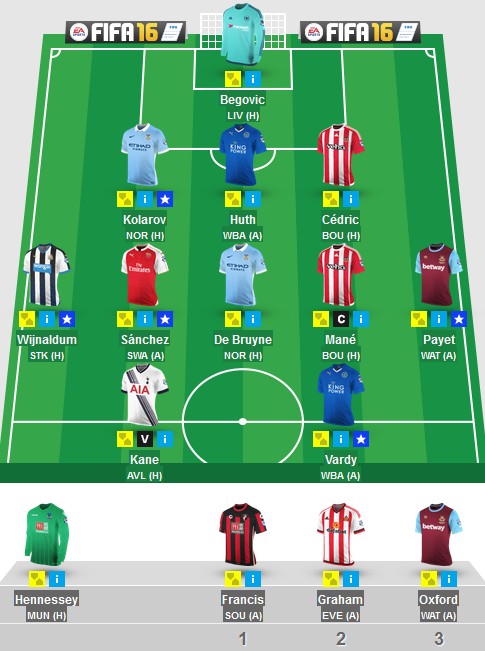 Another Gameweek, another red arrow and another 100k fall.  I'm now floating around the 600k mark which is far from ideal, obviously. Captain Vardy just about delivered, albeit "bap-less" and selling Ritchie for Wijnaldum for a -4 was premature, if not costly.  It could have been far worse had I not captained Vardy as the rest of my attacking players flopped. Walcott's no show was the final straw.  I didn't want to take another -4 hit, but the fact that both he and Costa got injured midweek gave me a chance to reshuffle some dead wood. Even if Costa is fit for the Liverpool match I doubt he'll be performing at 100% and Walcott over Ozil was a mistake I still regret.

Looking to Gameweek 11 I needed some inspiration.  This came in part when listening live to the Weekly Fantasy Football Show (podcast) with their discussion on Kane. But it was during a chance conversation with Rob (6 consecutive Top 5k FPL finishes in a row) that swayed and ultimately validated my purchase of Mane.  Firstly, with Kane, he won't score a hat-trick every week. But with the no Spurs cover and with him finally showing some form it made sense to buy him - he also faces Villa at home during a "MNF" game.  If he falters, I can always replace him with Lukaku through my wildcard.

As for Mane, I think he will go under the radar this week.  Many FPL managers saw him get a red card last Sunday and they may erroneously think he is banned for this Sunday. Wrong! The ban has already been completed with Southampton's League Cup game.  Mane has scored 3 goals and bagged an assist in his last 4 Premier League games, which is a fantastic return for a non-top 4 club midfielder that costs less than £8M.  To put things into perspective, he scored 10 league goals in 30 games last season.  Mane is a de facto striker and will face a depleted Bournemouth defence at home.  In addition, Southampton face Sunderland and Stoke in the next two Gameweeks. At less than 10% ownership and with an eye for scoring, he makes sense. I'm so impressed by his overall prowess that I am even captaining him over Kane.

Here's to hoping for some green arrows.  Good luck to you all!
Posted by fplhints