Gameweek 3 is over and in its place are fond memories for some, good riddance for others, and a little bit of "meh" for others still.  Before the internationals are over and the frenzy of pre-gameweek 4 begins, let's recap the goings-on of the 9-fixture gameweek that was.  Since it's a recap of gameweek 3, I'll give you a 3-line summary of each fixture, plus a short list of the top 5 FPL point earners from each fixture. Away we go....

Cardiff follow up huge home win vs City with scoreless home draw to Everton
Mirallas and Kim both squander good chances
Baines not fouled in box at 41st minute; or was he?

Happy happy joy joy to those of you who had:
Distin 9, Baines 8, Jagielka, Coleman, Marshall 7

Pennant highlights bore fixture with fantastic 82nd minute free kick
Jaaskelainen comes up big on Wilson volley and Walters' follow up
No 3rd point of interest; 2 is more than enough for that borefest!

Well, there you have it.  Gameweek 3 in a nutshell.  Here's a nice little screenshot of the Gameweek 3 Dream Team.  FPL managers carrying these players will look on and shake their heads with proud satisfaction while those who have activated their Wildcard during the international break can use it as a teaser as they build their "new" squad.  Good luck in gameweek 4 everyone! 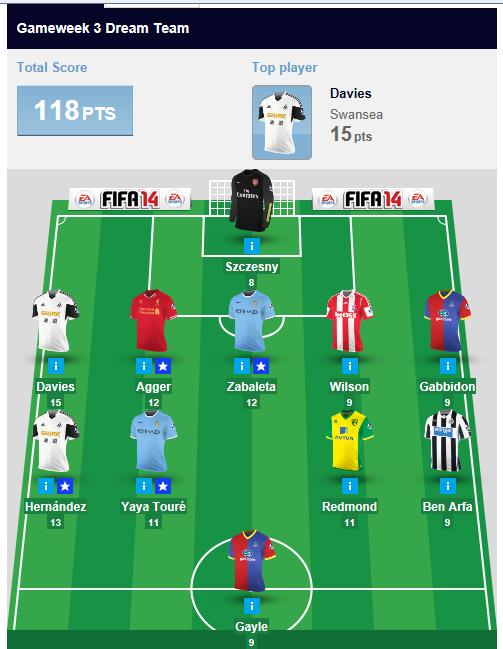