*FPLH reserves the right to change this team at any time.
Any changes made will be confirmed on FPLH's Twitter account. 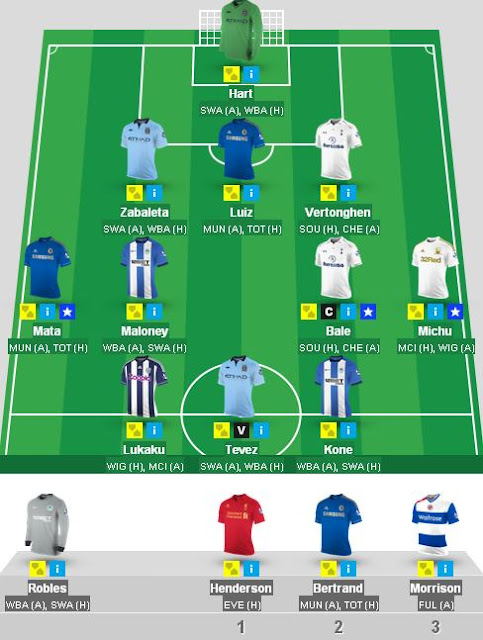 Folks, the season is almost at an end.  Yet I feel pumped up as if it has only just begun!

GW 36 is for the taking.  The final DGW.  I have been waiting all season to use my WC and the timing was right for this GW.  As a result, my team has been chopped and changed heavily with my Monday night heroes (RVP and Benteke) given the boot! Fear not, as I have enough funds at hand to bring in a decent midfielder or striker post-DGW.

My wildcard choices (as outlined) above are for maximum effect of DGW 36.  I have been careful to have a balanced team with only the most attacking and key players selected.  I wasn't going to select the now off-form Michu, but I thought it best to have some sort of Swansea DGW coverage

I have decided to captain Bale as I feel he offers the most DGW promise due to his form, fixtures and incentive to qualify for CL football.  Tevez is only my vice-captain as he has no trophy incentive left for the season, despite the relative ease of his fixtures.