Transfers: Reina and Santon (-4 Hit) OUT / Fabianski and Monreal IN 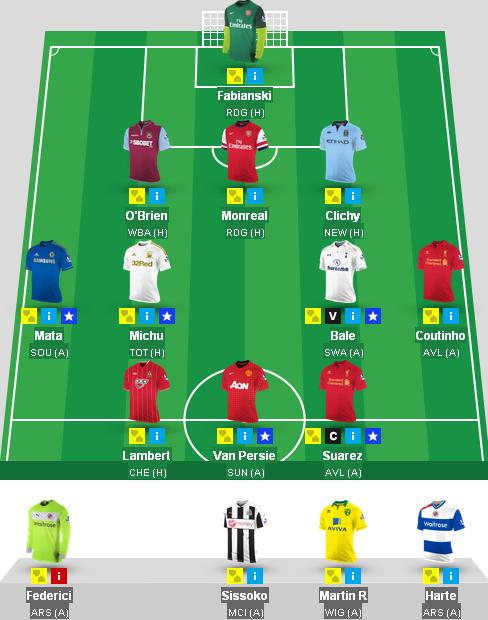 The international break is over... and I'm back!  No real lessons learned in the interim, apart from the fact that England crack under pressure and can't keep the ball.  Nothing new there I suppose.  Back to FPL...

With the "real" business end of FPL upon us, I decided to take a -4 hit.  Whilst making my transfers I had GW31 and DGW33 in mind.  I decided to sell Reina for Fabianki.  In truth, I was more keen on financing a move for Monreal, which is why I did the change in goalies and sold the injured Santon in the process.

Arsenal haven't been fantastic this season.  Having two defensive Arsenal players could be seen as risky.  But I think it's worth the punt, especially with 2 on form players.  Monreal in particular has shown his defensive and attacking prowess.  If all else fails I still have my wild card at hand which is a plus!

This GW I have decided to captain Suarez.  He may not have scored last GW, but he should be able to cut through Villa's defence like a knife separating butter.  My vice-captain is Bale.