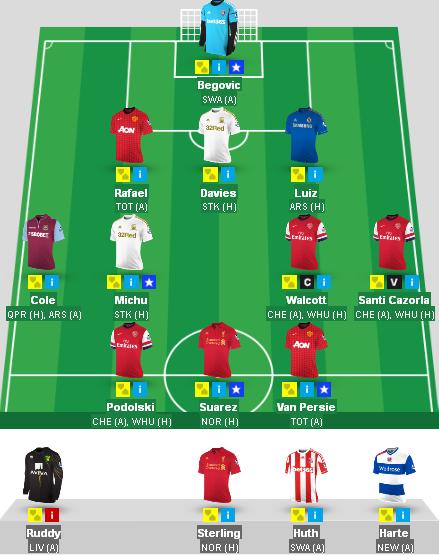 I had to hit the drawing board following my DGW 22 screw up.  A column of red arrows followed by a below average GW score (after -4 hit) sucks!  I didn't expect Southampton to play so well, hence no Saints coverage.  Aside from Mata, who scored 32/53 points for me, everyone else failed and my overall ranking tumbled dramatically.  I was tempted to use the wild card this GW but have opted to wait.

With another DGW ahead I have decided to take no chances this time around.  I purchased Joe Cole as I believe he will play a key part to boosting West Ham's attack.  His two assists v Man United on his return debut in the FA Cup is testament to his pedigree.  He is also a differential due to his low ownership.

My other transfer is a -4 hit and may come as a shock.  I have sold Mata, who I only bought last GW, despite his heroics.  The reason being that I think Cazorla is due a big haul and Mata was the only player I could sell.  Of course they will face each other this weekend, but with Chelsea's poor home form and with their other midfield options I am taking a risk at the fact that Mata will have a quiet game.  I can obviously bring him back if I wish to once I activate my wild card.

The other reason I brought in Cazorla was to complement Podolski and Walcott in their DGW.  I believe their match v West Ham will be a goals-fest, when taking into account the Hammers injuries and their lack of clean sheets of late.  Moreover I have decided to captain Walcott due to his "OOP" role as a striker.

Can score and assist goals from across the park
Is a game changer and can instill creativity
At sub £10M, he is value for money
Is definitely due a hatful of points