The week in Fantasy Premier League: Triple Captain troubles and using the Blank Gameweek to refresh your squad

Ken Rooney
Last week, it just took one Man City fixture announcement to catapult Sergio Aguero from a forgotten man to a would-be savior of our FPL seasons.
Before long, it seemed like every manager on Twitter was confidently taking the plunge and triple-captaining the Man City marksman. By the time Double Gameweek 27 finally kicked off, the excitement was palpable.
But, as is often the case, it found a way to troll us, ending with the whimper that was City’s 0-0 draw against Stoke. 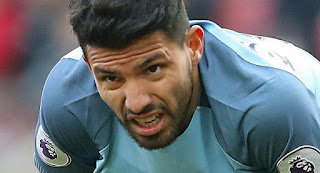 Amid all the clamour to bring in two or three Man City players, the week’s top scorers came in the unlikely forms of Dusan Tadic (SOU, 7.0) and Marko Arnautovic (STO, 7.1) - with Stoke defenders all returning double figures to boot!
As a strategy, there was sound logic to placing the triple captaincy on Aguero, and those who elected to hold onto their chip should be feeling more relieved than smug - future Double Gameweeks don’t hold any more guarantees than this one did.
Now, the altogether different challenge of the dreaded Blank Gameweek 28 has drifted into view like a tumbleweed, leaving many wondering how best to approach it.
to read the full article, click here...
Posted by Unknown