I reserve the right to edit this team right up until the final seconds of the Gameweek 1 FPL Deadline.  Any updates  will be announced on Twitter via @FPLHINTS


It only feels like yesterday when Manchester City and Liverpool finished last season in almost a dead heat of a race.  But there are no prizes for second as the Citizens did enough to nudge over the line and retain the Premier League title.  Liverpool were bereft and had to console their fan base by winning the Champions League. Both teams met again for the curtain raiser last weekend, which didn’t do much to rid the Community Shield of its tag of being a glorified friendly in the eyes of many.  But all of that is in the past now.  Wish the summer and your weekend afternoons goodbye, as it’s that time of the year again… FPL is back! 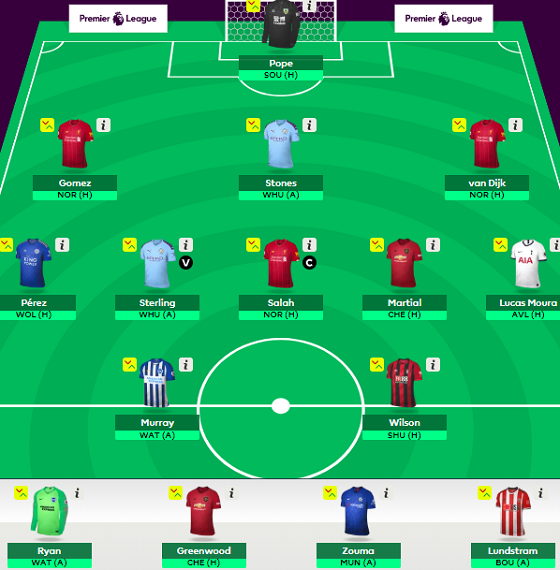 Avid readers of the blog will know that I used to post my team on here on a regular basis.  I stopped doing that a few years ago and I stopped tweeting about my team altogether before every Gameweek last season.  But seeing as I have been sharing my Gameweek 1 FPL teams for almost all of the past decade, I thought it best to share this one too.

Here's my reasoning behind each pick:

Pope/Ryan
Rotating goalies hasn't really worked for me in the past.  But I didn't fancy just having Ryan despite his generous fixture run.  Brighton didn't keep many clean sheets last season and with an attack-minded manager at the helm they may keep less this time around.  Pope and Ryan dovetail reasonably well for a prolonged period of time so I'm happy to acquire their services.  It's no coincidence that Pope's absence last season saw Burnley's backline struggle.  With him back and with some defensive reinforcements I would hope they can do well.

Van Dijk
He is the linchpin to Liverpool's defence and it's not surprising that he's the highest owned FPL defender on the eve of Gameweek 1.  Robertson and Alexander-Arnold are probably better for attacking potential.  But then again they are more prone to picking up yellows when tracking back and more prone to rotation once the Champions League games start again.  I think Van Dijk is value for money at £6.5M.  I expect him to be a mainstay in my team.

Stones and Gomez
I needed entry into Man City's defence.  Ederson was probably the safer pick but with Stones I have saved £0.5M less.  I expect him to start more games than he did last year.  Kompany's absence will be missed but it's time for players like him to step up to the plate.  Having him means that I need other defenders who can also start.  On that note, I've also chosen Gomez.  He missed a lot of last season due to injury.  He's not a guaranteed starter with Matip lurking about.  But I wanted double entry into Liverpool's defence without compromising funds up top.  I'm willing to take a few risks at the moment.  I hope both will start in Gameweek 1.
Zouma and Lundstram
Clearly it's unfair for me to class both of these defenders together but they sit on my bench for the start of Gameweek 1.  Zouma was a prized on-loan asset for Everton last season and it's no wonder Chelsea were happy to keep him for the 19/20 season.  With Luiz departing for Arsenal I expect Zouma to be a regular for Chelsea, but for Gameweek 1 he can it on the bench due to their match at Old Trafford.  As for Lundstram, he hardly played for Sheffield United last season and yet as a £4.0M defender was starting pre-season friendlies in midfield.  I couldn't ignore him after those exploits.  He takes up the 'Reece Oxford' slot in my team.  It would epic if he starts regularly in midfield.
The Attacking Out-of-Position Midfielders
I could have chosen a plethora of midfielders.  Honourable mentions must go to de Bruyne, Bernardo Silva, Richarlison and Sigurdsson.  But I came to the decision that I wanted players with out of position value.  Sterling and Salah were absolute must-haves so the midfield was built around them.  I didn't fancy fielding Guendozi and Dendoncker alongside them just to fit in Kane or Aubameyang up top.  It then dawned upon me that I could fit in three other de facto forwards in the other positions.

Perez was a sensation last season and is a snip at £6.5M .  He should make a good impression against a Wolves team that will be fatigued from there Europa League travels.  As for Moura, he was Spurs' unsung hero last season and it was unfair of him not to start the Champions League final.  He will be looking to make the most of his chance against newly promoted Villa with Son out of the team.  As for Martial at £7.5M, his attacking returns per minute were very respectable last season despite often being a sub or being subbed off.  With Lukaku out of the team he should play a more prominent role up top.  I simply couldn't ignore him and his differential status
The Budget Forwards
I've gone against my former belief that having three premium forwards was a must in FPL.  The game has changed and so have the prices.  Clearly value now lies in midfield.  It still means I need forwards that can make an impact albeit at a lesser cost.  Murray at £6.0M seemed fairly cheap despite his influence in the Brighton team last season.  His place may be at risk with new reinforcements.  But the fact that he played as the main striker in pre-season is a positive sign.  He will be hoping to retain his place up top despite his mature age and he is worth taking a risk on with his generous fixture run.

As for Wilson, I think he is under-priced after his superlatives last season.  The England international registered 26 attacking returns during the last campaign with the Cherries who scored the 7th most amount of goals.  Sure he will have to share the spoils with King and Fraser, but his opening fixtures are also worth investing in.  Finally this brings me to Greenwood.  He's hardly played much minutes in the Premier League.  I needed a £4.5M forward to complete my puzzle and he fitted perfectly.  I think he is a good sub 1/2 option.  He may not start many matches this season but at his price he could be interesting.  United have a Europa League campaign to contend with and he may make more starts there.  But as with Kane a few years ago with Spurs, once he impresses in the non-Premier League games, it won't be long before he can become the focal point of their attack.  Bench fodder for now, but I'm fine with that.

All the best with whoever you pick in Gameweek 1.

Be sure to keep up to date with FPLHINTS on Twitter.

You can also keep track of content related to the FPL Community by visiting fplmanagers.club