The festive period is now upon us. Fixtures will become congested and FPL managers will rapidly face GW after GW. Due to the short turnaround between matches, rotation, which we dread so much, is now a reality. This may result in an increased number of hits being taken to get our teams right and ensure all our players are ‘nailed on.’ As a result, to counteract these hits and situations where not all of our players start, it is of paramount importance that we choose the correct captain and vice-captain.

Here are some of the top captain picks for GW16, and also some sneaky differentials for those chasing points.

This one seems an easy decision. With 5 goals in 5 games since his return from injury, Kane is a man in form. In particular, his home form has been spectacular. He has played 3 home games in all competitions since his return, and has netted 5 goals, with a shot frequency of 1 every 14.39 minutes. His team’s home form has also been excellent, having scored 11 goals in these 3 matches. In addition to form, Kane also has the fixture this week to thrive. Hull have the worst defence in the league, conceding 32 goals so far, and averaging 20 shots conceded per away game. This poor defensive record is in contrast to the attacking dominance of Spurs, who have averaged 22 shots per home game since Kane’s return. Hull have also conceded 7 penalties this season, that’s almost 1 every 2 games. As Kane is Tottenham’s penalty taker, his appeal is thus heightened.

Both Costa and Hazard are great picks for captain this GW, but I have gone for Costa. Obviously, Costa is in great form, and he has been all season, with only 2 blanks in 15 GWs. However, the more compelling reason for captaining Costa is his history against Sunderland. In this fixture last season, Costa really troubled the Black Cats’ defence and dominated the match. He netted a goal, and had 3 shots on target, all of which were big chances. Therefore, due to this fact, I am confident that Costa can carry his form into GW16 and reward his owners.

Zlatan himself would be surprised if he found out that he is not one of the top captain picks each week, but this GW, he definitely is. Over the last 7 GWs, The Eagles have conceded 20 goals. This is nearly 3 goals per game, and if anyone can continue to breach this defence, Zlatan is the man. Over November, Ibra found his form again and he has carried this form into December, with 7 goals in 7 games. In addition, over this period, he has registered an attacking involvement (shot or chance created) every 13.7 minutes, which demonstrates how central he is to the offensive play of The Red Devils

Noltio hasn’t played a lot of minutes recently, having seemingly fallen out of favour since his GW5 red card. However, when given the opportunity, he has shown the attacking threat he poses. In his last 3 league starts, none of which he has played more than 77 minutes, he has managed a shot every 26.25 minutes and created a chance every 35 minutes. This is reasonable for a player without regular game time who has not been given an opportunity to find form. However, although the loss to Leicester was a disaster for Manchester City, it may have been positive for Nolito. After replacing Sergio Agüero up front in this match, Kelechi Iheanacho did not impress his manager, and was replaced by Sterling after 57 minutes. Then, with 23 minutes remaining, Nolito came on, playing in a ‘false 9’ position. In this short time, he really threatened the Foxes’ defence, registering 4 shots (all inside the box) and netting a consolation goal in the 90th minute. However, this goal and performance might have broader implications for Nolito, who has probably earned himself a start this GW, either at ‘false 9’ or on the wing. This will see the tricky Spaniard face a Watford rear-guard who have conceded 9 goals in their past 2 away games. Subsequently, although a large risk, I think that captaining Nolito could pay off brilliantly for those courageous enough.

Currently overshadowed by Jamie Vardy after his hat-trick vs Manchester City, Islam Slimani himself has been in good form. Despite registering 2 goals and 3 assists in his last 5 PL starts, Slimani has been somewhat forgotten by FPL managers. However, I think that this GW will be the one where he shows his quality. Regardless of the fact that he hasn’t netted in his past two games, Slimani really started to hit his straps in these matches, managing 7 shots and really troubling both defences. In particular, his performance against Manchester City was very promising. He had 4 shots, two of which were big chances, and also got 2 assists. As a result, Slimani clearly has the potential to build on this form and punish a Bournemouth backline who have shipped 3 goals in each of their last 3 games.

In the same way as Kane, this home fixture promises well for Alli and the Tottenham team. Despite a struggle to decide between Alli and Eriksen, I have opted for Alli due to his more direct threat. In Tottenham’s last PL home game, which was a 5-0 drubbing of Swansea, Alli excelled. Although not netting a goal, he did register 5 shots (3 inside the box), 2 of which were clear cuts chances that were well saved by Fabianski. In addition, he provided 2 assists, setting up 5 chances. Furthermore, in the last Champions League group game against CSKA Moscow, Alli also showcased his immense threat at home. In this match, he pulled off 7 shots (all inside the box), 2 of which were clear cut chances, and he netted a goal. He also created 5 chances (2 clear cut). In comparison, the majority of Eriksen’s shots come from outside the box or from free kicks. Therefore, although Eriksen is an excellent option and player in his own right, I think that Dele Alli will exceed him this GW and provide a solid captaincy option for those looking for a differential.

So, here is the Star Picks XI for GW16 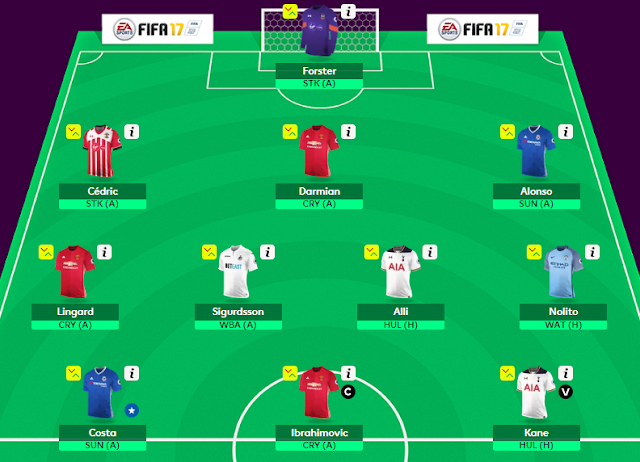 If you have any questions about GW16 or need some advice on your team, please don’t hesitate to contact me on twitter – I’m happy to help.

For all the latest injury news, visit:
http://premierinjuries.com/

For all the latest team news, visit:
http://www.fantasyfootballscout.co.uk/team-news/

Enjoy this week’s Premier League action and good luck to all FPL managers for GW16.