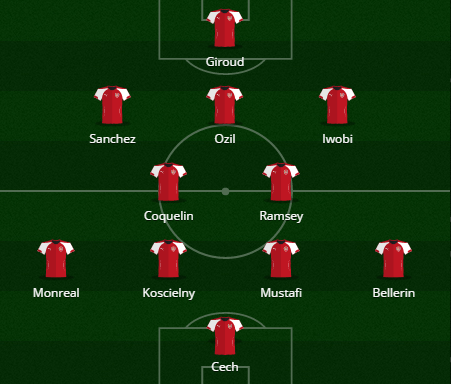 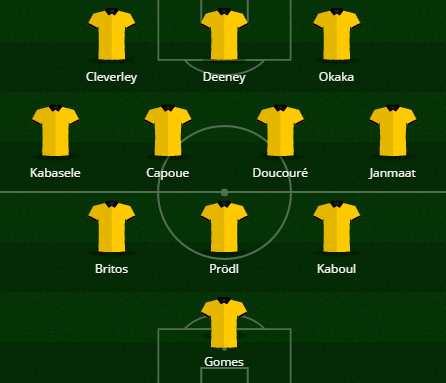 Coming off the back of a dramatic win against Burnley last GW, Arsenal will be looking to have the 3 points in the bag much earlier when they play Watford at home in GW23. In the last 3 Premier League meetings between these sides, Arsenal have netted 10 goals (3.33 per game). This brings Alexis Sánchez (£11.9 – TSB 37.6%), Mesut Özil (£9.5 – TSB 7.3%) and Aaron Ramsey (£7.6 – TSB 1.0%) into contention for FPL points, and also Theo Walcott (£7.4 – TSB 4.4%), who returned from injury in the FA and netted a hat-trick. In addition, Arsenal have not conceded a goal to Watford at their home ground since 1998, so FPL returns for Arsenal defenders, particularly Laurent Koscielny (£6.3 – TSB 18.1%) also seem likely going off past meetings. However, Watford do possess some quality attacking players in their side, namely Tom Cleverley (£5.1 – TSB 0.1%), M’Baye Niang (£6.0 – TSB 0.0%) and Stefano Okaka (£5.3 – TSB 0.1%), so if these players can make an impact and pick up from where Watford left off last GW away to Bournemouth, they may be able to pressure Arsenal and make it tough for the Gunners. It is also worth noting that the Gunners are more prolific on the road this season and at times have struggled to break teams down when playing in front of their own fans, so they will have to be at their best to beat Watford this GW. 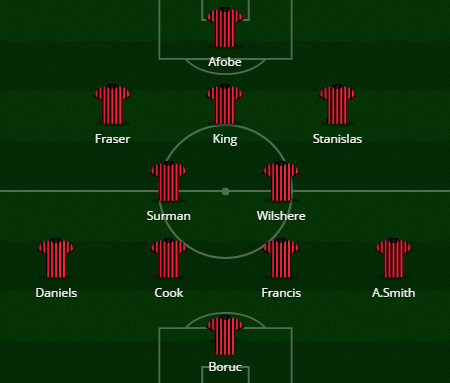 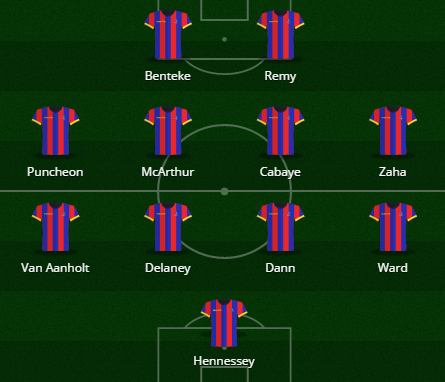 After close games for each side last GW, both Bournemouth and Crystal Palace will be out to pick up a win in GW23. For Bournemouth, a win could see them move into the top half. As a result, Benik Afobe (£5.6 – TSB 0.8%) and Joshua King (£5.3 – TSB 0.7%) could be ones to look out for, as they will no doubt be threatening the leaky Eagles defence with their attacking prowess. For Crystal Palace, picking up a win is of immense importance after falling into the drop zone last GW. Central to their efforts for victory will be Scott Dann (£5.2 – TSB 2.9%), who has 2 goals in his last 2 games against the Cherries, as well Jason Puncheon (£5.2 – TSB 0.7%) and Löic Remy (£6.3 – TSB 0.2%). 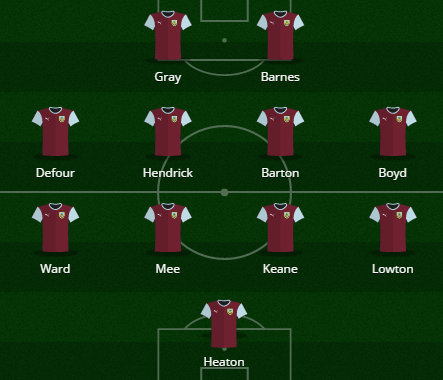 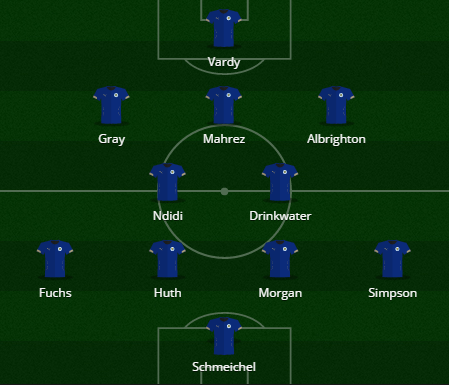 Confidence will play a big part for both sides in this match. On one hand, Burnley’s confidence would be high after their recent performances. In the last 5 matches, they have registered 3 wins, all coming at home. In fact, Burnley have the 4th best home record in the league this season. The other 2 matches were both 2-1 losses, to Manchester City and Arsenal, where the Clarets put in performances worthy of a victory. As a result, Tom Heaton (£5.0 – TSB 17.7%), who has 2 clean sheets in his past 3 home games, and Andre Gray (£6.2 – TSB 5.3%), who has 6 goals in his last 6 games in all competitions, both are full of confidence at the moment and may be thorns in the side of Leicester. On the other hand, Leicester are currently lacking confidence. They have lost back to back PL games 3-0 and then almost lost to Derby in the FA Cup. As a result, this game could be the one to end Leicester’s 10 game unbeaten run over Burnley. 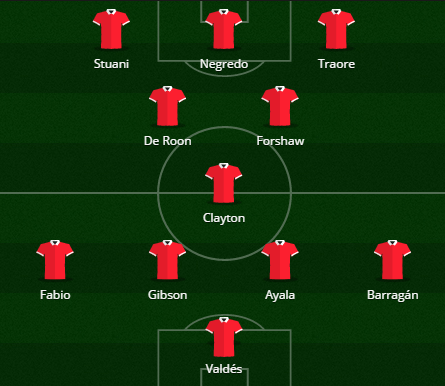 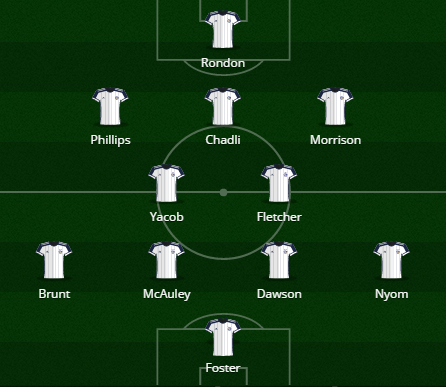 West Brom come into this match on the back of some excellent form and also a dominant record over Middlesbrough. 3 wins in their last 4 games, as well as an unbeaten record against lower placed opposition since GW4 has resulted in the Baggies sitting 8th on the table (2nd after Everton excluding the ‘Big 6’ teams). This period has seen the rise of Matty Phillips (£5.9 – TSB 21.5%), who has 4 goals and 9 assists this season. Furthermore, West Brom’s record against Boro makes them overwhelming favourites in this match. The Baggies have kept 5 clean sheets in their last 5 games against Boro, scoring 11 goals and picking up 4 wins. Therefore, Chris Brunt (£5.0 – TSB 2.8%), who has 2 goals in his last 3 games, and also Gareth McAuley (£4.9 – TSB 27.9%), who has 1 goal, 1 assist, and 3 BPs in his last 3 games, are both stand out FPL options at the back this GW. 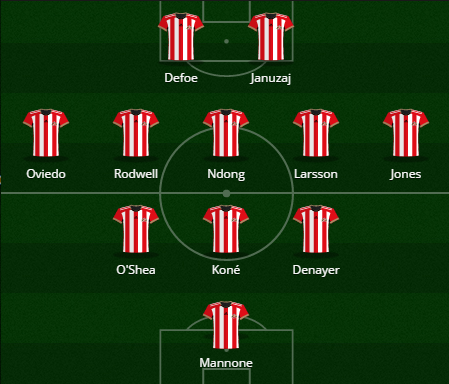 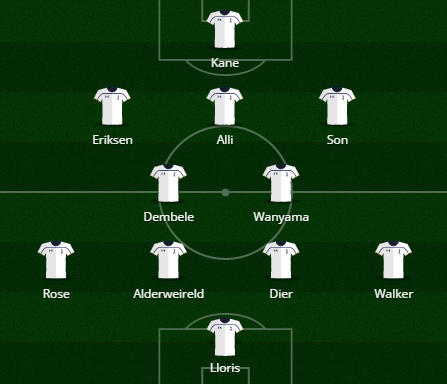 This game involves teams in two completely different situations. Sunderland are currently sitting rock bottom on the ladder, with 7 losses in their last 10 games, conceding 2.1 goals per game over this period. In comparison, Tottenham are on a 7 game unbeaten run, and have netted 26 goals in their last 8 games (3.25 per game). Moreover, Spurs are unbeaten in their last 13 PL matches against Sunderland, picking up 10 wins and scoring 23 goals. It is worth noting though that in this run, Spurs have only kept 5 clean sheets. As a result, Harry Kane (£11.2 – TSB 19.9%) and Christian Eriksen (£8.7 – TSB 16.4%) look particularly appealing FPL assets in this match. For Sunderland, the only player who could be considered for a place in our starting teams is Jermain Defoe (£7.9 – TSB 28.5%), who has scored 12 goals this season (4 in his past 4 games), and may be motivated by the ‘old club factor’ to score against Tottenham. 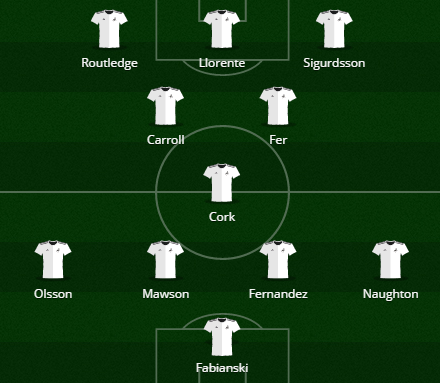 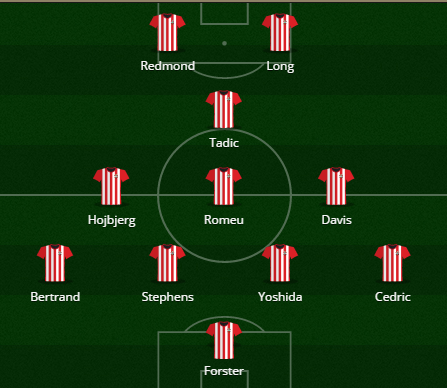 Last GW, Swansea put in one of, if not their best performance of the season against Liverpool away at Anfield. Key to their success in this match was Fernando Llorente (£6.1 – TSB 3.8%) and Gyfli Sigurdsson (£7.2 – TSB 5.3%), who together won the match for Swansea. Tom Carroll (£4.2 – TSB 0.5%), who picked up an assist on debut, will also be pivotal to Swansea’s attacking play, and if afforded the no. 10 position, could be a player who performs well above his FPL price tag. Subsequently, these players will again need to play well if Swansea are to get anything out of this match. Their opposition, Southampton, returned to winning ways again Leicester in GW22, and then backed it up in the EFL Cup with another 1-0 victory over Liverpool. They too will be in search of all 3 points, and this could be possible because of two reasons. Firstly, Swansea have the worst defensive record at home this season (27 goals conceded), making Shane Long (£6.1 – TSB 3.1%), Dusan Tadić (£7.0 – TSB 1.4%) and Nathan Redmond (£5.8 - TSB 5.0%) ones to look out for. Secondly, Southampton have kept 4 clean sheets in their past 4 visits to the Liberty Stadium, bringing Ryan Bertrand (£5.4 – TSB 1.2%) onto the radar of FPL managers. Therefore, a victory for both sides will be very important, and this game should be a very close encounter. 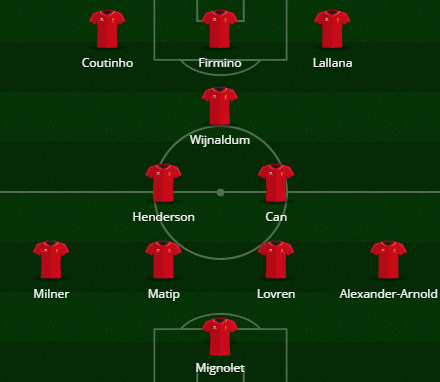 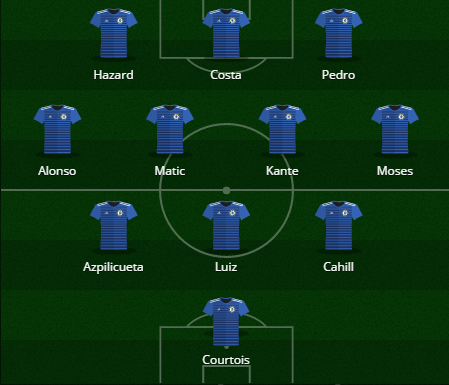 Liverpool have slipped further back in the title race as they are without a win in 3 games. A loss could see them drop to 5th, but a win could see them move back into 2nd. Central to their efforts for victory will be the rejuvenated Roberto Firmino (£8.4 – TSB 11.2%), who scored 2 goals from 6 shots in GW22 and also Philippe Coutinho (£8.3 – TSB 18.7%), who bagged a brace against the Blues last season. Gini Wijnaldum (£7.5 – TSB 1.3%) could also be one to keep an eye on in this game, having picked up 16 points in his last 2 home games. Moreover, Liverpool will gain confidence from their record against Chelsea, as they are unbeaten in 6 games against the Blues. For Chelsea, 3 points will keep them on track for the title. However, a loss will place great pressure on them, especially considering that their nearest rivals, Arsenal (2nd) and Tottenham (3rd), have ‘simple’ fixtures. If they do lose, their lead could be reduced to 5 points, with the possibility of 2 points if they lose again to Arsenal next GW. Consequently, Chelsea will place great enormity on this match, and Eden Hazard (£10.3 – TSB 31.6%) could re-discover his goal scoring touch this GW. Therefore, the result of this match will have significant implications for both sides and it should be a hard fought game. 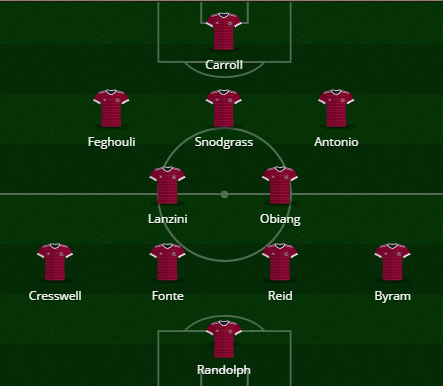 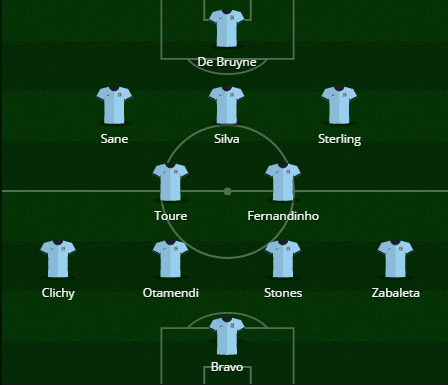 Since Payet has been out of the West Ham squad, they have looked like a completely different team. 6 goals, 1 clean sheet and 6 points in 2 games has seen them rise into the top half of the table, and they have shown no signs of slowing down. A key factor to this success has been the unity that is now evident in the squad, with all players working hard for each other and the team. Over this period, Andy Carroll (£6.3 – TSB 3.9%) with 3 goals, Manuel Lanzini (£6.3– TSB 0.5%) with 1 goal and 2 assists and Michail Antonio (£6.9– TSB 12.1%) with 4 assists have all excelled and it is likely that this form will continue into their GW23 encounter with Manchester City. However, West Ham have only beaten City three times in their past 24 matches, so these players will need to be at the top of their game to get a positive result out of the match. For City, they will be looking to find some form for themselves after poor performances over the past month or so. In particular, their away form has been poor. They have only kept 2 away clean sheets all season, and conceded 4 goals in their last away game, so it is likely that the West Ham attackers will have opportunities to score throughout the game. As a result, it will be vital that City’s attacking big guns stand up and find form. Their FA Cup win over Crystal Palace may have been the game to kick start this form, with Raheem Sterling (£7.7 – TSB 9.3%), Yaya Toure (£7.3 – TSB 1.1%) and David Silva (£8.6 – TSB 2.1%) standing out. Subsequently, both sides will probably play to their strengths (attack), so this match has the potential to be a high scoring one. 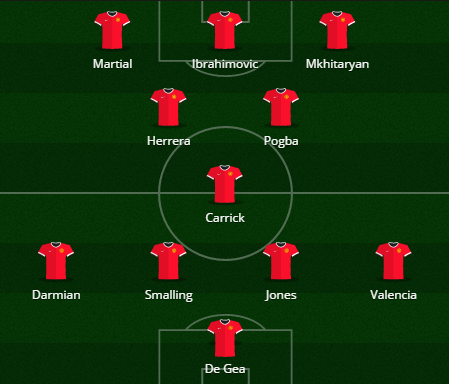 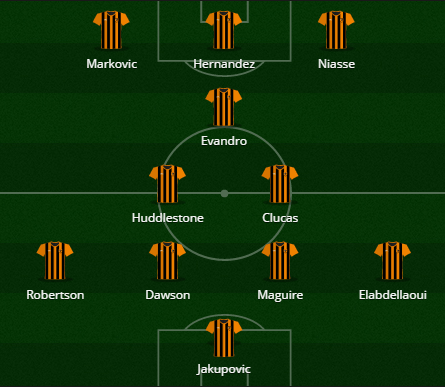 This match could be closer than most people think. Manchester United have struggled in their 3 matches against Hull this season, and although they won 2 of these matches, keeping a clean sheet on both occasions, they have looked unconvincing. Subsequently, Hull will gain confidence from this, and after defeating the Red Devils in the EFL Cup Semi-Final 2nd Leg, they will know that they can defeat United. It is highly unlikely that Hull will be able to keep a clean sheet in this game, so new signings Oumar Niasse (£5.6– TSB 0.1%) and Lazar Marković (£5.4 – TSB 0.0%) will be key figures in Hull’s attacking play and will definitely threaten the Man Utd backline. Niasse in particular is one to look out for, especially given his performance against the Red Devils midweek, where he netted a goal, had 3 shots on target and hit the post. Thus, Man Utd will need to be at their best to not let the 3 points slip away from them in this match. Subsequently, Zlatan Ibrahimović (£11.7 – TSB 43.4%) and Paul Pogba (£8.5 – TSB 11.0%) will be crucial for Man Utd and they must impose themselves on the match in order for their side to claim a victory. 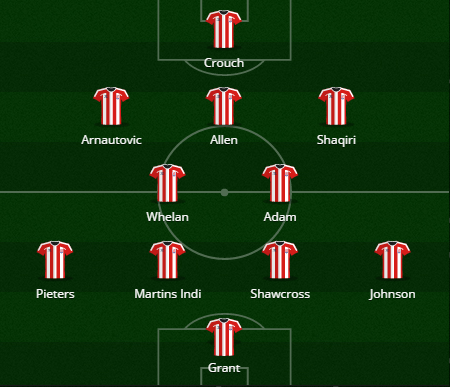 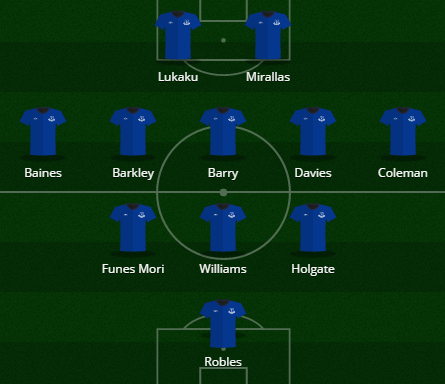 Everton are perhaps the most in form side in the PL at the moment. Undefeated in 5 games, with 4 clean sheets and 12 goals, Koeman has got his side playing excellent football. This period has seen the rise in form of Seamus Coleman (£5.6 – TSB 7.3%), who has been deployed as a right wing back. Also, Romelu Lukaku (£9.6 – TSB 26.3%) with 3 goals and 1 assist, Ross Barkley (£7.0 – TSB 6.2%), who has 1 goal and 3 assists, Kevin Mirallas (£6.1 – TSB 3.3%) with 2 goals and 2 assists and also Tom Davies (£4.4 – TSB 2.0%) who has 1 goal and 2 assists over this period are all worthy of a mention. Coming up against Stoke on a wet and windy night at Bet365.com Stadium in GW23 won’t be a straightforward task though. The Potters too have been displaying top draw performances as of late, and they are without a loss in 3 matches. Pivotal to this form has been Peter Crouch (£4.8 – TSB 4.3%), who has 3 goals and 2 assists in his last 4 games and Xherdan Shaqiri (£6.1 – TSB 3.2%) has also looked threatening as of late. Subsequently, both sides have form on their side and possess match winning players, so this match will be very close.