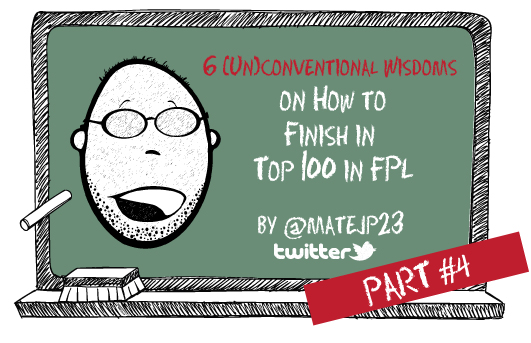 OK, so if you have somehow managed to bear with me and claw your way through my ramblings on the first three so called (un)conventional wisdoms AND you still want to continue reading…well, the choice is yours, but you have been warned – more ramblings coming your way.

By now you basically know my budget and team strategy – I invest all my money into the team, I have only 1 goalkeeper that I do not alternate and I invest disproportionately into my midfielders. Which leaves one more question which I should have answered in one of the previous posts – what do I do with the bench?

This one is probably closely connected to my basketball playing days and has a lot to do with ego. You see, I always wanted to be the first team selection and have battled with everything I had to be the top or at least one of the top players on the team. During my career I have come to realize, accept and appreciate the fact that the bench is an extremely important part of a TEAM in real life - much, MUCH more than one would assume if you have never played on at least a semi-professional level. These are the guys against whom you play every day in practice and are the ones who push you day in and day out to squeeze that last atom of energy out of your exhausted body so that you can beat the opponent come game time. But, at the end of the day, they are still exactly that – bench players. And while they will bail your ass on the odd occasion, it is clear that in 80+% of cases you will need to rely on your first team to bring home the bacon.

Now, don’t misconstrue the above statement as saying you should buy the cheapest players available just to complete the roster – for sure not. As said, there will be times when your key players will either not play, perhaps because they have a cup game or play in Europe midweek and there is a chance that they will not suit up. Or maybe they picked up a last minute injury and you have no time to react, but are stuck with them in the starting 11. That’s when bench players come in.

My personal strategy is to get cheap players, but cheap players who have guaranteed playing time. If you can (on top) get such who are playing out of position (for instance, classified as defenders, but play as midfielders) or are more attacking minded – even better! Just make sure they play. Worst case scenario, it means you will be (most likely) getting at least 2 points.

But this was not the wisdom #4. For the purpose of that, I would like to introduce the term “bandwagon effect”. In case you are not familiar with the term itself, this is how Wikipedia defines the latter:
The bandwagon effect is a well documented form of groupthink in behavioral science and has many applications. The general rule is that conduct or beliefs spread among people, as fads and trends clearly do, with "the probability of any individual adopting it increasing with the proportion who have already done so".[1] As more people come to believe in something, others also "hop on the bandwagon" regardless of the underlying evidence.

How does this translate into Fantasy League Football? Well, do you know when a player scores a hat-trick or a brace (this means two goals in case you didn't know - I know I didn't until I started following some British forums)? Or perhaps has 4 assists and a goal and all of a sudden EVERYONE wants to have that player and are willing to take apart their teams just to be able to purchase that player immediately? And because everyone else is buying that player all of a sudden 40% of the teams have that guy (not to mention that the price skyrockets)? Well, that’s called the “bandwagon effect”. Come to think of it, it correlates closely with herd behaviour, if you are interested in stock markets.

See, there is nothing wrong in buying a player when you think he is due a good game, either because of weak opposition or great run of form. Sure, go ahead, even if that coincides with the week when he scored 20+ points. But buying that player JUST BECAUSE he did this one week and expect him to repeat it the next one? Please don’t. It is highly unlikely to happen. If you are still thinking that you might want to do it next year, then I have an exercise for you. Repeat after me: “I will not jump on more than 2 bandwagons this year!” Now write that down at least100 times. 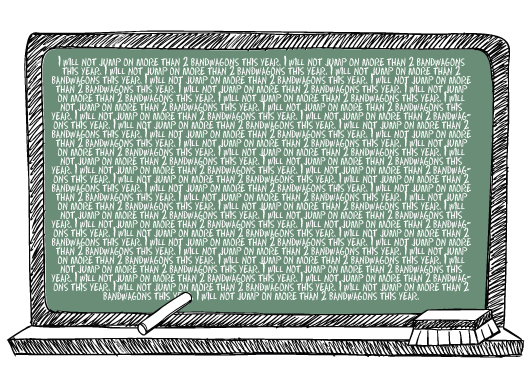 Trust me, I know how it feels. Every week when a player puts in a stellar performance I go through the same four steps in my head: 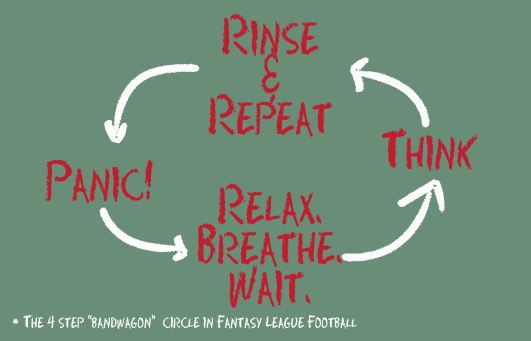 Thank god, I usually manage to stop at point 3) (after a couple of circles, ahem) and not give into temptation.

Sure, you will have your fair share of swings and misses when you refuse to be drawn in this whole “bandwagon” thing and you may miss on the exploits of Cisse from the end of season 2011/12 (man, this one really hurt L) or do not get the duo of Begović/ Jääskeläinen just because you think there is no way Stoke will continue to lock it up at the back. And then they go and do exactly that. But you have more than one chance. Realize that if you do get drawn into bandwagoning (wow, did I just make up an “English” word?) your team will look the same as everyone else’s and there is no way you will advance in your rankings. Even without that teams homogenize throughout the season and by the end of it they start looking more or less the same.

You see, one thing you need to remember is that the key is to find a player who MIGHT start performing any time now and getting him JUST BEFORE he actually does. That’s the real key. But I am getting ahead of myself; this is already a topic for wisdom number 5…so for next time…today I leave you with:

Be honest with me. How many bandwagons have you chased last year? Do you have any regrets for the ones you didn’t? Leave a comment or send me a tweet on Twitter (@matejp23), I am really curious to know.