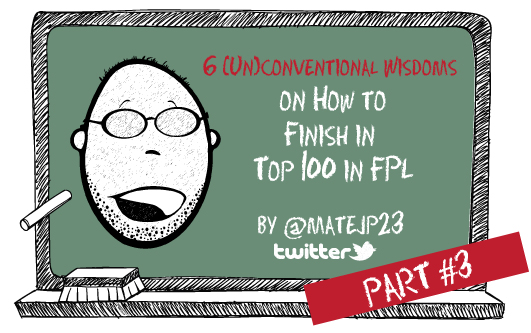 OK, I need to come clean about this next “wisdom” that I have in store for you today. I have had the text in my head kind of written MUCH BEFORE I had actually sat down and did my analysis.

See, I wanted to make a statement that (at least last year) the 3-5-2 formation was by far the best system to be used, thanks in large to the amazing outputs by midfield heavyweights and I wanted to conclude that I would recommend using it disproportionally this season as well. 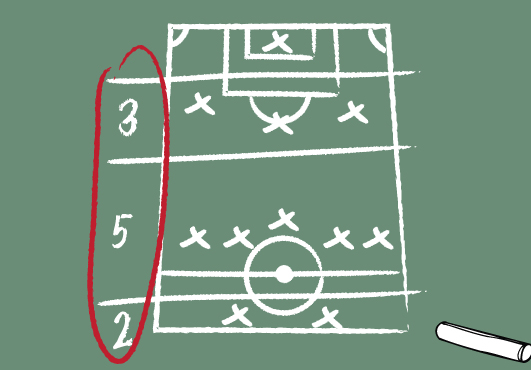 Mea culpa, I admit. So, I bet you are thinking, why exactly are you telling us this then? Well, because when I actually delved into the numbers, they took me by surprise.

I believe that by now you have managed to make a mental picture about how I approach the game (if you have read my story on rising to Top 50 and both (un)conventional wisdoms published so far). If not, no worries, I will spell it out for you: “I go with my gut feeling”. Almost every time. Always have. Always will. While I love numbers (imagine, math was ALWAYS my favorite subject in school, high school and university – geeky, right? J) and still crunch them as much as possible, especially at work, the majority of my successes, be it in business, sports or personal life, came courtesy of the gut. So, what seems to be the problem? Ahem, the numbers don’t really support what my gut (was) is telling me, at least not conclusively. [nervous cough]

I would have claimed and argued with anyone that I have played the 3-5-2 formation for at least 80% of the last season and that it was one of the main reasons for my success. 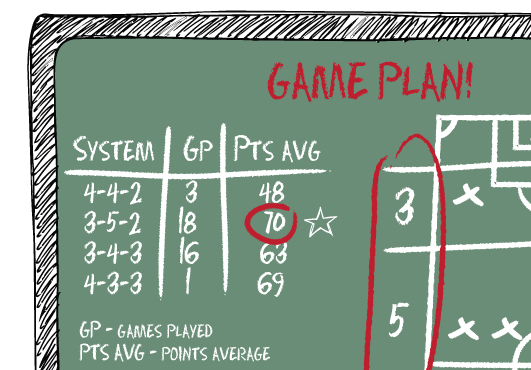 So, I went even deeper. I checked how much has each playing position contributed to my point total. Almost half (47%) of the point total was coming from midfielder position, with 26% from forward position and only 19% from defenders. Ok, sounds pretty much obvious as I had the most players from midfield, but what happens when you look at the average amount of points each position has contributed? To make this a fair competition, I decided to strip all players of the double (c) points in order to see their base points and not to mix this story with selection of the right captain. 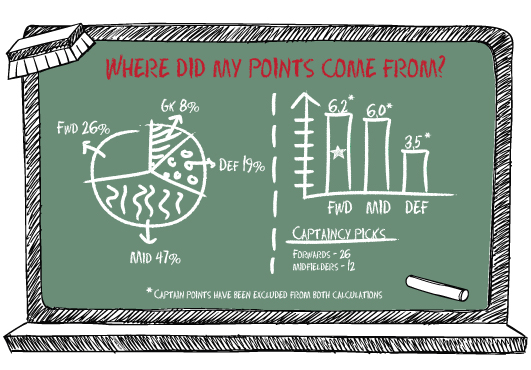 Interestingly enough, my typical Warsaw Hopefuls (my team name) forward edged my typical midfielder by 6,2 points to 6,0 points on average.

And on top of that I have actually captained my forwards 26 times and my midfielders only 12 times. Mind-boggling? Well, I had Suarez and RVP for the majority of the season and for the better part of it, they were the most logical picks for the captain band. You know, stay calm and just captain RVP.

So, while I wanted my Wisdom #3 to be “Play the 3-5-2 formation – it is the best”, it seems I actually need to rework it. Judging from the data above, I would actually say that while there was a slight average point advantage of the 3-5-2 formation to the 3-4-3, it was not a decisive one and in best case, I would position this one as not conclusive. But looking at what my team has looked like throughout the entire season, I would put it this way:

Yup. This is how I roll. No conclusive findings? I’m going with my gut. While I have been made aware that the new bonus points system might favor more the defenders and/or forwards, I am still inclined to build my team around 3-4 strong, heavyweight, if not all-star midfielders and 2 top strikers. Let’s see how it goes.

What are your plans for the season? Will you spread your bucks evenly across the team? Invest in 3 all-star strikers? Get bullet-proof defense? Let me know, I love to hear different opinions. Leave a comment or send me a tweet on Twitter (@matejp23), I am really curious to know.

P.S. If you are interested in (un)conventional “wisdoms” #1 and #2, look no further.